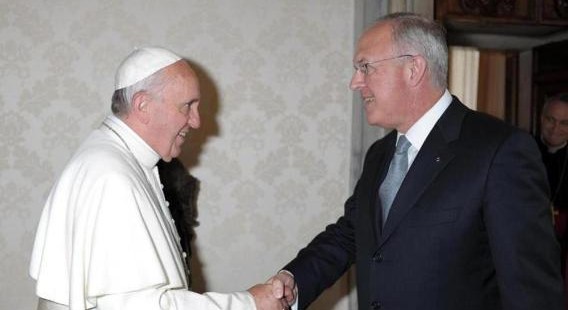 During the meeting, Anderson discussed with the Holy Father the Knights’ many initiatives, focusing particularly on their ongoing work on behalf of persecuted Christians in the Middle East.

ISIS is committing genocide — the “crime of crimes” — against Christians and other religious groups in Syria, Iraq and Libya. It is time for the United States to join the rest of the world by naming it and by taking action against it as required by law.

The K of C report included witness statements and lists of known crimes against Christians, churches known to have been attacked, and a Christian and Yazidi sexual slave price list. It also documented the mental and physical effects of displacement and key public statements on genocide.

During his audience with Pope Francis yesterday, Mr. Anderson also presented to the pope the earnings from the Knight’s Vicarius Christi fund, in the amount of $1.6 million.

The proceeds of the Vicarius Christi [meaning Vicar of Christ] fund are given annually to the pope for his personal charities. Since the fund’s inception in 1981, more than $57 million in gifts have been donated.

The Knights of Columbus was founded in 1882 by Venerable Father Michael McGivney, a parish priest, in New Haven, Connecticut. The organization was formed to provide charitable outreach and care for the financial well-being of Catholic families, focusing on the protection of widows and orphans, and on strengthening the faith of its members. It has grown to count 1.9 million members worldwide.

Last year, the Knights reported a new all-time record for charitable giving with more than $175 million in donations and more than 75 million hours of service.