Religion is always political, but it can never be partisan 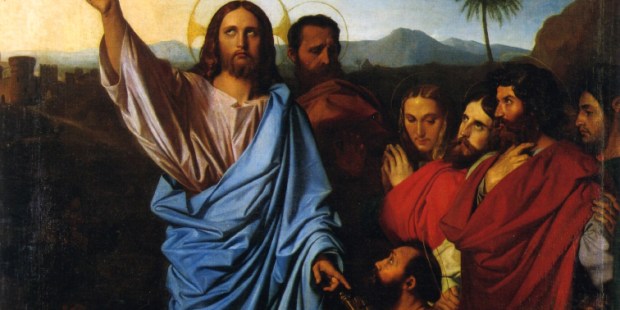 Jesus said to his disciples: “You have heard that it was said, An eye for an eye and a tooth for a tooth. But I say to you, offer no resistance to one who is evil. When someone strikes you on your right cheek, turn the other one as well.”
—Matthew 5:38-39

A few days ago a priest friend told me about something that was left in the collection basket of his parish during a recent Sunday Mass. As the “money counters” were going through the Sunday offerings, they saw a blue “visitor” envelope among the wadded bills, folded checks, and regular offering envelopes. On the envelope was written the following message: “The cord between my wallet and the collection basket was severed by Pope Francis’ involvement in politics.”

My friend and I laughed that someone would take the time to leave such a message. But as our conversation continued, I was reminded of a bit of wisdom that I read a few weeks ago: “Religion is always political, but it can never be partisan.”

Given our country’s history of the separation of church and state—not to mention the current political climate—a quotation like this is surely to raise some eyebrows (or tempers!), but I think the sentiment holds true. Our individual and collective beliefs must—if they are sincere—impact our personal and collective politics. Hopefully, for us as Christians, our participation in the world of politics should be motivated by our belief in the innate dignity of every person and in our commitment to promoting the common good (see Catechism of the Catholic Church, 1905-1917).

As I reflected on the First Reading and Gospel of this Sunday’s liturgy, I was struck by how timely these particular passages seemed to be, especially as we continue to debate about the intersection of faith, politics, and the social order.

In the Gospel—the conclusion of the Sermon on the Mount—Jesus effectively brings together all the themes that we have heard the past three Sundays. Moving from the Beatitudes and the promises God makes to those who live according to the demands of discipleship, Jesus then helped us understand that those who live those demands are like “salt” and “light,” bringing flavor to a bland, lukewarm world and light into the dark places where death and despair have a hold. Then, this past Sunday, we were reminded that Jesus expects his disciples to be go above and beyond the basic demands of the Old Law, living lives that were more faithful and faith-filled than most observant religious leaders of his time. And now, weaving together these various threads, he reminds us love is the fulfillment and measure of God’s Law, bringing to fulfillment the words from Leviticus we hear in the First Reading.

As theologian José A. Pagola has observed, “From his experience of a non-violent God, Jesus proposes a nonviolent practice of resistance to injustice. This means living in unity with a God whose heart is not violent but compassionate… He simply suggests a way of acting that tests the limits of the possible. He does this by proposing specific situations that graphically show how to reach against evil: Do not [violently] resist an evildoer. But if anyone strikes you on the right cheek, turn the other also; and if anyone wants to sue you and take your coat, give your cloak as well; and if anyone forces you to go one mile, go also the second mile.’” In the end, Pagola reflects, Jesus’ desire for his followers is to help make the Reign of God a reality in the world by combating evil and injustice responsibly and courageously because God’s Reign demands that we live lives of love and compassion.

Reflecting on this theme, Pope Benedict XVI remarked, “Love of one’s enemy constitutes the nucleus of the ‘Christian revolution,’ a revolution not based on strategies of economic, political or media power: the revolution of love, a love that does not rely ultimately on human resources but is a gift of God which is obtained by trusting solely and unreservedly in his merciful goodness. Here is the newness of the Gospel which silently changes the world! Here is the heroism,” Pope Benedict concludes, “of the ‘lowly’ who believe in God’s love and spread it, even at the cost of their lives” (Angelus, February 18, 2007).

Where do I see injustice and suffering in the world? How am I being asked to respond with love and compassion?

Pope Francis has reminded us several times that Christians are called to build bridges, to foster relationships across ideological and cultural differences. When confronted with difference and diversity, do I risk reaching out?

How do you allow the suffering of persecuted Christians throughout the world shape your acts of mercy and your prayer?

Words of Wisdom: “If anyone should ask you what are the most radical words in the gospel, you need not hesitate to reply: ‘Love your enemies.’ It is these words that reveal to us most clearly the kind of love proclaimed by Jesus. In these words we have the clearest expression of what it means to be a disciple of Jesus.” –Henri Nouwen