The humanity of rivals: When a liberal and a conservative grieved together 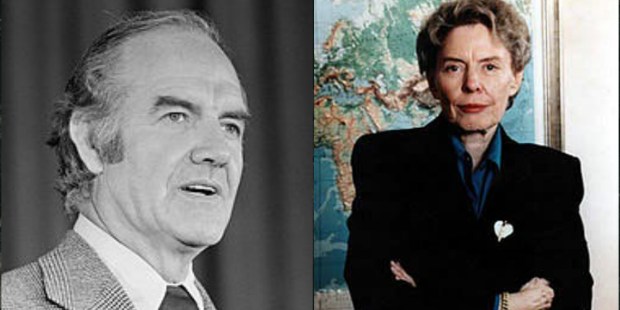 In an era of fierce, unforgiving political street fights, George McGovern and Jeane Kirkpatrick set down their weapons and comforted each other.

It was the moment. His life would change forever.

It was late evening when the doorbell rang. Though his wife had already retired, he was sitting comfortably perusing a magazine. But he knew it was the moment. Two men, well-dressed, were standing at the door. As the Los Angeles Times wrote at the time,

“Before he opened the door, he suspected two things: They had come about Terry and the news was bad. Senator, we are so sorry. Your daughter Teresa is dead. Last night she wandered into a dark alley and fell into a snow bank. She was intoxicated. No one found her until noon today.”

George McGovern, senator, former presidential candidate and liberal standard-bearer, stood silently. And then he “stumbled into his dark study. He couldn’t turn on the light, couldn’t speak, and couldn’t cry. For 10 minutes, he wandered in circles around the room.”

After dozens upon dozens of failed efforts at rehab, his daughter, his baby, his bright light was dead. And George McGovern, father, wept.

She sensed it was coming.

Douglas’ problems began years before, as early as high school. At first, the drunken outbursts were private, but soon spilled into the public sphere. There had been moments of contrition and reform, but always darkened by the specter’s return. To have a son afflicted with alcoholism was, at times, more than a mother could bear. In a rare show of tears, she once confided to a friend,

“I’d trade it all, this and everything else, if only Douglas could be normal.”

Then, one day, Douglas was found in the hallway outside his condominium having suffered a heart attack. He was dead at the age of 50.

Jeane Kirkpatrick, former United Nations Ambassador, celebrated intellectual and conservative warrior, was devastated. After years of pain and angst, her son, her baby, her bright light was dead. And Jeane Kirkpatrick, mother, wept.

Alcoholism ripped life apart for George McGovern and Jeane Kirkpatrick. And it did so by striking at the heart of what they held most dear: their children. Though they held such diametrically opposed politics, worldviews, and perhaps even value sets… they both deeply, genuinely, painfully loved their children. And what is unknown to many is that when George McGovern’s daughter was found dead in 1994, Jeane Kirkpatrick reached out to him. A sad and sympathetic conversation took place between two political foes, a true blue liberal and a rock-ribbed conservative. As they talked about the deep, transcendent love of a child and the heart-wrenching angst that comes when suffering with a child’s self-destruction, politics were irrelevant. As Peter Collier would describe in his biography of Kirkpatrick, Political Woman,

“They talked about missed opportunities and desperate gambits. The subject of ‘tough love’ came up. McGovern told her he had tried to practice it with his daughter and failed. Jeane admitted that she hadn’t even tried. It was a touching moment in which two bitter enemies on opposite sides of the political divide found common ground at the end of their lives in shared grief over children they had been unable to save.”

In an era of fierce, unforgiving political street fights, a liberal and a conservative set down their weapons and comforted each other. A dad and a mom shared their wretchedness, their helplessness, their grief. One suffering soul consoling another.

They wept together. And, perhaps in a way, healed just a little, too.

And how very, very human.