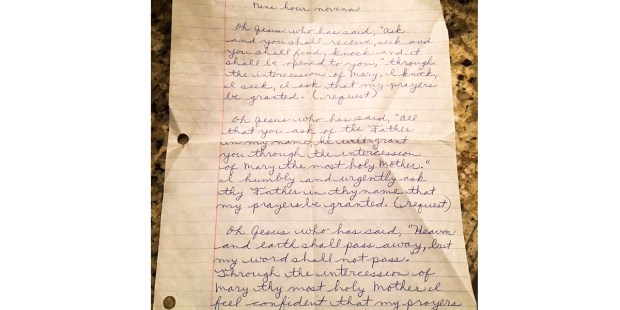 My friends and I were typical college kids, but we were also united by our desire to understand who we were in the great universe …

So many Catholic young people “lose their faith” when they head to college. For me it was the opposite — it was during my college years that I discovered and fell in love with the Church as Mother.

God guided my spiritual growth by working through something very simple: friendship.

My friends and I were typical college kids — pulling all-nighters during finals week and enjoying the social life of the dorms — but we were also united by our desire to understand who we were in the great universe, what we’d been created for, and what life was about.

Those years included the wrong turns and the wrong-headedness of youth, but they also gave us the foundations on which we’ve built our lives and vocations.

And most of us still keep in touch. Some are consecrated to the Lord, one is a priest, one has already gone before us to eternal life; most of us are up to our eyeballs in the joys and trials of family life. But we have a WhatsApp group to send out news of new homes purchased, parents’ failing health, new babies being born, and new challenges facing our teenagers. The one consecrated to God and working in Rome makes us jealous with pictures from papal Masses and holy shrines.

And we still ask each other for prayer, just like in the old days.

A few weeks ago, as one of us was wrestling over a big life decision, we realized that one prayer — a version of Padre Pio’s “Ask and You Shall Receive” Novena — had been a staple during all the twists and turns of our decades of friendship.

More to read: My mystifying and miraculous “spiritual childhood” with St. Padre Pio

“I still have it on the angel stationery that Marie gave me,” one piped up. “It’s been folded and re-folded so many times I’ve had to cover nearly all of it in tape. I’ve said it more times than I can remember for so many intentions and people. Works every time!”

“It helped me with exams!” a studious friend recalled.

Another quickly produced a picture of her version, making us all smile to recognize the handwriting of one of the group (which we never see anymore, now that we only communicate by chat). “It’s been in my bedside table since college,” she said in posting it.

And the original scribe responded: “If I would have known it was going to be conserved for so long, I would have written better ;)!”

So here’s this trusty novena, tried and true, the go-to for a bunch of crazy college kids still trying to figure out what life’s all about, still trying to fall more in love with God and the Church, still keeping each other in prayer:

Oh Jesus who has said, “Ask and you shall receive, seek and you shall find, knock and it shall be opened to you,” through the intercession of Mary, I knock, I seek, I ask that my prayer be granted (mention request).

Oh Jesus who has said, “All that you ask of the Father in my name, He will grant you,” through the intercession of Mary thy most Holy Mother, I humbly and urgently ask thy Father in thy name that my prayer be granted (mention request).

Oh Jesus who has said, “Heaven and earth shall pass away, but my word shall not pass,” through the intercession of Mary thy most Holy Mother, I feel confident that my prayer will be granted (mention request).

(Say once every hour for 9 hours continuously)

More to read: 9 Times the mercy: Praying a novena for the good of someone you dislike

A “novena” is a prayer or series of prayers recited in sets of nine (hence the name) — usually for nine days, but in this case, for nine hours.

According to the Catholic Encyclopedia the history of novenas is linked to various concepts and devotions. There’s Christ’s nine months in the womb, for example, but also and especially, the “novena” that he himself exhorted the Apostles to do in preparation for Pentecost. Mary and the Apostles were in the Upper Room for nine days, awaiting the gift of the Holy Spirit.

There is also the link to the three persons of the Trinity, praised in Scripture and in liturgy with the designation of holy repeated three times (cf Rev 4:8). “Holy, holy, holy is the Lord God almighty.”