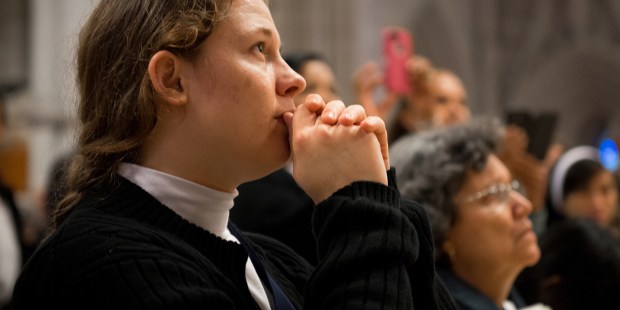 “Darling,” cooed the elderly stranger I occasionally saw at Eucharistic Adoration, “you will make a wonderful nun!”

She gushed her proclamation, uninvited, like a prophet. I forced myself to smile at her before I scurried away.

Great, I thought. Another sign. God kept sending me these signals — never an angel or anything — but so many indications of his will for my destiny.

I hated the very idea. I felt I was under a gnawing vocation choke-hold that had become my daily anxiety. Each week that passed was only borrowed time God was giving me before “shackling” me in a convent and draping me in a habit.

Fifteen years of Catholic school education had given me 15 annual “vocations weeks,” with sisters and priests giving talks about how “I was just like you once. I never thought I would be a priest/nun until one day….” Each year, I just knew they were talking directly to me. All my favorite saintly heroes were men and women who had laid down their lives for Christ literally and figuratively, all while collared, clericed or robed.

The extent to which I believed in my religious life “cross” is embarrassing. I remember regretfully turning over marriage magazines at supermarkets so I didn’t have to look at them. I would tear up when I held babies. I took admittance to St. Joseph’s emergency room as a “sign from God” that I should join the Sisters of St. Joseph.

Read more: Trusting God when I think “I should have been a nun…”

And I would quiver in prayer before my God who I believed was going to make me be a nun. I grew ashamed of my desires for marriage and motherhood. I grew hurt and pained that the God who was supposed to love me was going to force this vocation on me … to sanctify me. I had no eyes for the saints in daily life around me — the ones finding holiness through diapers and swallowed sarcasm and carpools to chess club.

The worst consequence of all this was that I distanced myself from the Father, who would have brought peace to my mind. And I failed to grow in love with Christ and learn who he really is. I failed to know that my Father is a God of deep, seemingly irrational love for me, who carries delicately in his hands the deepest desires of my heart.

I continued to put God on the back burner and barrel headstrong into my own convictions about religious life. Upon graduating from college I took my “discernment” to the next level, moving into a convent with religious sisters, motivated entirely by my “I might as well get this over with” attitude. I remember the mystified expression of the sister who first welcomed me into their home and heard me explain, “Well God is making me be a nun so I figured I might as well bite the bullet.”

After four months with these sisters, I remember meeting with my spiritual director, a tiny Irish spitfire with the spunk of a 20-year-old. We were to discuss my future at the convent. What were my feelings? What were my desires? What drew me there? What had I learned through prayer?

My responses had to be the most baffling waste of time for the poor woman. I pontificated on my “great calling.” How the goal of sainthood had driven me from my earliest years, along with the belief that religious life was the only real way to holiness. How I’m actually pretty religious, and people aren’t these days, and so I just know God is calling me to be great.

I expected I was really impressing her with my countercultural devotion. When I had finished my rant she looked at me with a face of humorous suppression. There was a long pause.

“No my dear, you don’t have to be a nun.” Her sweet unexpected words didn’t prepare me for the left hook coming. “And if you think the Church or God need you, please do us a favor and don’t become a nun.”

And there, with my ego clumped around my ankles, I was free to find my real vocation, my vocation to fall in love with God. Because what I had failed to see was that sisters, brothers, priests, married — all were just seeking the best means to fall in love with God. Their vocation was merely the mode through which they would seek Heavenly intimacy. It wasn’t the end, it was the means. I’d been ignoring the whole point.

I didn’t realize that in the deepest fiber of my being, in my mother’s womb, God designed me with the vocation simply to love him, and all I had to do was seek him, and thus find my sanctity. I had thought God was dragging me kicking and screaming to the convent. Instead I should have been kicking up dust running to him. And there, in the quiet intimacy of our love, he would tell me, “Casey, I have something magnificent for you.”