The Gesù: When art came to the rescue 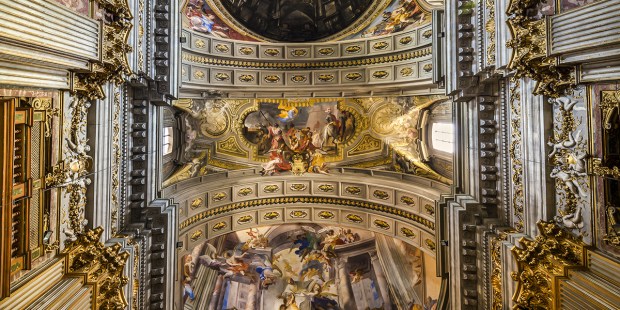 Lessons from the Counter-Reformation in how Beauty speaks to Truth

On the 500th anniversary of the Protestant Reformation, this series of articles looks at how the Church responded to this turbulent age by finding an artistic voice to proclaim Truth through Beauty. Each column visits a Roman monument and looks at how the work of art was designed to confront a challenged raised by the Reformation with the soothing and persuasive voice of art.

The struggle over sacraments is almost as old as the Church. Specifically, the mystery of the Eucharist has challenged the limitations of human imagination for centuries. How, after all, can we truly understand how bread and wine transubstantiate into the Body and Blood of the Lord? Yet when reason alone is insufficient to grasp a mystery such as the Eucharist, the Church has often adopted beauty to open the minds and hearts of believers. One need only think of the Eucharistic hymns of Saint Thomas Aquinas or the majestic cathedral of Orvieto, built to house the relics of Italy’s most famous Eucharistic miracle.

The challenge of explaining sacraments to the faithful grew even more difficult after the Reformation. Although Luther always affirmed the Real Presence of Christ in the Eucharistic species, others, such as Ulrich Zwingli, argued that the Eucharist was merely a sign, saying “I have no use for that notion of a real and true body that does not exist physically, definitely and distinctly in some place.”

Faced with alternate doctrines and a clergy often unable to clarify the situation to the baffled faithful, this increasingly empirical society, accustomed to understanding through sight and touch, grew skeptical towards the presence of Christ in the Eucharist.

The Council of Trent duly affirmed the Real Presence in 1551, but then the real work began. How to reawaken the faithful to the Eucharist? Enter the dynamic duo of the Counter-Reformation, St Charles Borromeo and the 11-year-old Society of Jesus. Together, they would leave a beautiful, enduring and educational memorial to centrality of the Eucharist in the glorious Roman church of the Gesù.

Among Borromeo’s many gifts was an interest in architecture. His 1577 treatise, Instructiones Fabricae et Supellectilis Ecclesiasticae, applied the decrees of the Council of Trent to the design and decoration of Catholic churches ( and was reprinted 19 times up to 1952). The mother church of the Jesuits, begun in 1568, became the atelier for his ideas, although it was paid for by his old adversary Cardinal Alessandro Farnese. In a beautiful act of Providence, both Cardinal Farnese and Borromeo commenced their ecclesiastical careers as wealthy and worldly men, but through the constant contact with the Jesuits each experienced an intense personal conversion.

The Gesù, as the first church to be constructed in Rome after the Reformation, set out to focus the faithful on the sacrament of the Eucharist. The architectural challenge was so stimulating that even the aged Michelangelo had offered his assistance for free, but the task fell to Farnese’s house architect Giacomo Barozzi da Vignola. The majestic travertine façade, its powerful stability borrowed from the example of ancient Roman structures, declared its purpose as the receptacle of the ineffable Lord. The uneven number of doors, desired by Borromeo to focus on the center, seem low in relation to the façade, which makes for an awe-inspiring first impression as one enters the soaring space crowned with the innovation of a high barrel vault.

The Gesù was the first church in Rome in over a millennium to be built without a rood screen — a gate separating the faithful from the space of consecration. In response to their empirical age, Borromeo and the Tridentine fathers encouraged the faithful to see the host and the consecration. The entire design of the Gesù drew the eye uninterruptedly from door to altar, like the lens of the telescope.

A low rail replaced the screen, gathering the people around the Body of Christ, instead of leaving them outside. Reinforcing St. Ignatius’ methods of the Spiritual Exercises, the Gesù invited the laity to taste, touch, see, hear and smell the Presence of the Lord.

In the apse, the tabernacle sat in a direct sightline from the door. The goal of the arduous journey of life, represented by the long nave leading to the sanctuary, beckoned from the entrance. Made of precious stone, a temple within the temple, it was raised up on steps, so as Moses encountered God on Sinai, Jesus transfigured at Tabor and redeemed mankind on Golgotha, so we climb to reach the Body of Christ.

In the Gesù, that space of the living Lord was surmounted by a dome, the first in Rome after that of St Peter’s (which at the time was still unfinished). Lifting one’s eyes after communion, the high rounded dome, seeming to float above the large windows, offered a glimpse of the desired union which, “after the journeying of this miserable pilgrimage, be able to arrive at their heavenly country, there to eat, without any veil, that same bread of angels which they now eat under the sacred veils.” CT 13 ch 7

G.B. Gaulli decorated the dome and vault of the Gesù, pulling back the veil of our mortal vision, to depict the heavenly celebration that is the Mass.

The side chapels, instrumental in proclaiming the efficacy of the sacrifice of the Mass for souls as reaffirmed by Trent, received careful consideration in the church. United by doorways, the chapels also serve as side aisles, leaving main path of the nave unimpeded. Uniform in size, the chapels avoided the Renaissance taste for bigger chapels according to status, as well as eschewing the self-glorification of personalized chapel dedications by selecting the subjects as part of a larger program.

The Gesù program is intended to guide the communicant from the altar back out into the world. Paired left and right across the nave, they start with the intangible: the Trinity and the order of Angels decorated by the giants of Counter reform art Jacopo Bassano and Federico Zuccari.

The following chapels record the historical reality of the Incarnation paired with the deeply moving Chapel of the Passion by Gaspare Celio. At the entrance, the prophets Isaiah and Zechariah entreat the viewer to “see thy teacher” and to “look on him whom they have thrust through.” Four images of Christ surround the altar, exposed during His passion to public view where the unseeing crowd chose to beat, ridicule and condemn Him.

The weight of witness marks the final chapels, originally dedicated to the apostles and to the martyrs. Placed by the exit doors, they summon those who have seen and experienced the truth of Christ, as do we when we participate in the sacrifice of the Mass, to “go forth and make disciples of nations.”