Why is there a feast day for a chair? 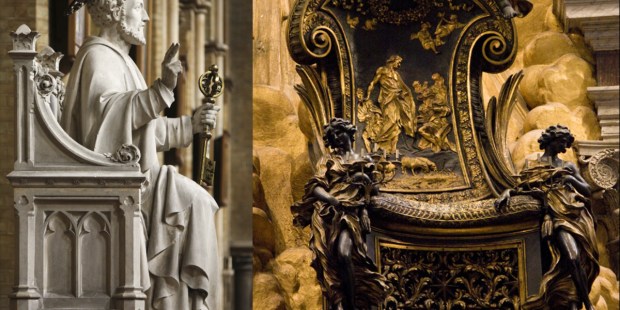 And what is the ‘Chair’ of St. Peter?

February 22 in the Catholic Church is officially the “Feast of the Chair of Saint Peter.” At first glance the title is a bit strange. Why do we devote an entire day in the calendar to a chair? Seriously, what’s the big deal?

The Feast of the Chair of Saint Peter has a twofold meaning. First, it refers to the actual chair (called the cathedra petri in Latin) that Saint Peter sat on while reigning as the first pope. Officials in the Roman Empire would sit on chairs when administering judgments or when engaged in official ceremonies. Having arisen within the Roman Empire, this tradition was replicated in the Roman Catholic Church and survives to this day. Bishops, for example, have a special cathedra they sit in for liturgical ceremonies in their cathedral church (the church gets its name from the chair). The chair denotes a bishop’s special authority over a particular region and links him to the successor of Saint Peter, the pope.

At one time it was believed that the actual chair of Saint Peter was encased in a sculpture designed by Bernini located in Saint Peter’s Basilica. However, recent archaeological evidence questions that claim.

Secondly, the feast refers to the spiritual authority bestowed upon Saint Peter by Jesus. There is a tradition that February 22 marked the anniversary of the day when Jesus said to Peter, “You are Peter, and on this rock I will build my church, and the gates of hell shall not prevail against it” (Matthew 16:18).

Pope Benedict XVI gave a great summary of the spiritual dimension of the Chair of Saint Peter in a General Audience in 2006:

“So what was the ‘Chair’ of St Peter? Chosen by Christ as the ‘rock’ on which to build the Church (cf. Mt 16: 18), he began his ministry in Jerusalem… The Church’s first ‘seat’ was the Upper Room, and it is likely that a special place was reserved for Simon Peter in that room where Mary, Mother of Jesus, also prayed with the disciples… Then Peter went to Rome, the center of the Empire… So it is that the See of Rome, which had received the greatest of honors, also has the honor that Christ entrusted to Peter of being at the service of all the particular Churches for the edification and unity of the entire People of God… The See of Rome, after St Peter’s travels, thus came to be recognized as the See of the Successor of Peter, and its Bishop’s ‘cathedra’ represented the mission entrusted to him by Christ to tend his entire flock… Celebrating the ‘Chair’ of Peter, therefore, as we are doing today, means attributing a strong spiritual significance to it and recognizing it as a privileged sign of the love of God, the eternal Good Shepherd, who wanted to gather his whole Church and lead her on the path of salvation.”

In the end, we celebrate a chair not because of the material object, but because of the person who sat on that chair and the spiritual authority given to him by Jesus Christ.