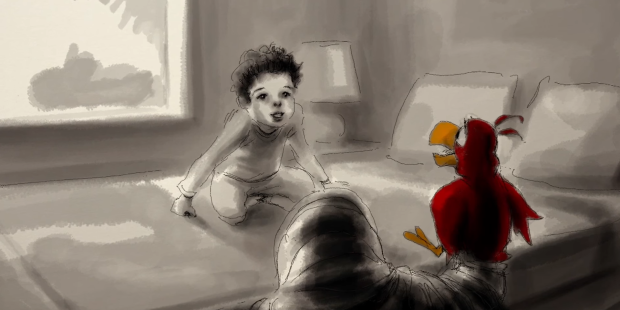 When Owen Suskind was just three years old, he disappeared. He didn’t go missing in the physical sense, he went inside himself — he stopped speaking, laughing, and lost motor skills. Eventually, Owen was diagnosed with regressive autism.

An article in Forward tells the story: Owen’s father, Ron, and his mother, Cornelia, were told by doctors that Owen would probably never speak again. From that moment on, their lives were never the same. Ron got busy making as much money as he could as a journalist and writer to fund the expensive treatments and care that Owen needed; Cornelia turned all her attention to her sons Owen, and his older brother, Walter.

The story of what happened to Owen after that became the subject of a book Ron wrote called Life, Animated, which inspired an Oscar-nominated documentary film by the same name, directed by Academy Award winner Roger Ross Williams. The title succinctly captures the story of Owen Suskind.

About a year and a half after Owen’s diagnoses, while watching The Little Mermaid (Owen had become obsessed with classic Disney movies), he suddenly began repeating a word. At first, it sounded like gibberish, but then Cornelia realized he was repeating something in the movie. Doctors said this was just something called echolalia, which is the act of repeating sounds without understanding what they mean. But the doctors were wrong — something more was going on.

Two years later, Owen noticed that his 9-year-old brother Walter was down in the dumps after his friends left his birthday celebration. Owen walked over to his parents and said, “Walter doesn’t want to grow up. Like Mowgli [from The Jungle Book] and Peter Pan.”

Ron and Cornelia were shocked. Not only had Owen spoken a full sentence, he had made a keen observation. Ron then followed Owen into his room and using an Iago puppet he saw on the floor — Iago was a favorite parrot of Owen’s found in the movie Aladdin — Ron began imitating Gilbert Gotrfried (who voiced the character in the movie), asking Owen how he was. Here is what Owen said:

“I’m not happy. I don’t have friends. I can’t understand what people say.”

The two had a brief conversation, and then Owen, surprisingly, laughed.

His parents also discovered he had taught himself to read by studying the closing credits of the movies, and he could draw and copy. Owen’s world had become that of the Disney characters and legends he watched. By familiarizing themselves with the Disney films, Owen’s parents began to understand Owen’s inner life and eventually helped him to regain his speech — a technique known as “affinity therapy” that is now being studied by psychiatrists, according to a piece in Huffington Post.

In the documentary Life, Animated, Owen narrates his own story about his interest in Disney heroes, as well as something he wrote on his own called, “The Land of Lost Sidekicks.”

“In Owen’s story, the sidekicks have to find their inner heroes,” says Williams, who says that the main message of the film is “the enduring power of storytelling.”

“Owen has grown up on a diet of myths and fable and story,” Williams says. “We all need story to survive, but this is about the power of story to transform one life in such a profound way.”

Now a young adult, Owen is able to communicate well and live on his own on a special community.