The priests who lay down their lives for their daughters 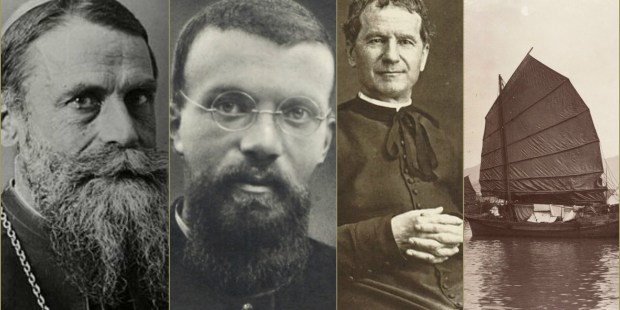 St. Luigi Versiglia and St. Callisto Caravario gave their lives to save the lives of lay people threatened by Chinese Communist pirates

The history of the Church in China is a long and complicated one, with mission after mission that lasted only a time before being driven out by persecution. In the 19th century, St. John Bosco (who influenced so many saints it sometimes seems everything he touched turned to a halo) had a dream about the future of the Church in China: a chalice filled with sweat and another filled with the blood of Salesians.

St. Luigi Versiglia (1873-1930) had no idea that this dream would guide his life. A faithful altar server, the young Luigi still had no intention of becoming a priest, focused instead on his goal of being a veterinarian. His attempts to get a good education led him to John Bosco’s Oratory in Turin, where his hard work earned him the Saint’s attention and his open heart led him to a Salesian vocation.

Received into the order by Blessed Michael Rua, Luigi was ordained at 22 and settled into a life that was far from the missionary vocation he desired. For nearly a decade, he worked on the formation of young Salesians but frequently reminded those around him of his longing to be a missionary. “My trunk can be packed at a moment’s notice,” he would say.

In God’s time, Father Versiglia’s wish was granted: he was sent to China where, with 5 other Salesians, he opened an orphanage and school. A priest in the model of St. John Bosco, himself, Father Versiglia was gentle and loving, willing to do whatever it took to love and serve his people. He was a true father to them and as the political situation of China became more unstable and the position of Christians more precarious, Father Versiglia had no desire to leave. Whatever his people suffered, he would suffer with them.

With this attitude in his heart and the dream of John Bosco on his mind, Father Versiglia was offered a gift by his superiors: a chalice. As he received this chalice, he submitted: “Don Bosco saw the Chinese missions flourish when a chalice would be filled with the blood of his sons. This chalice was sent to me, and I will have to fill it.” Father Versiglia accepted the chalice of suffering for his Chinese children and he would not turn back.

When Versiglia heard that the area in which he served was going to become a vicariate, he immediately wrote to his superiors asking not to be made a bishop; he preferred to stay with his people. He was ordained a bishop not long after, but refused to allow the dignity of his office to keep him from his vocation to serve. Loved by his people, he spent much of his time traveling (always in the cheapest possible way) to visit his people all over the diocese. Bishop Versiglia anchored his life in the Eucharist, before which he prayed every morning and night, while spending all the rest of his time in direct service to his children.

It was this desire to know his people personally that led him to drink the chalice of martyrdom. He was traveling with one of his priests, St. Callisto Caravario, to Father Caravario’s parish, when the group was attacked by Communist pirates. When the Saints realized that the pirates were after the three young women in their party, they began by trying to reason with them and finally tried to fight them off physically, putting themselves between the women and danger. Bishop Versiglia and Father Caravario were beaten with sticks and rifle butts until the bishop collapsed, still weakly begging that the pirates leave them.

As the two clerics were dragged off into the wilderness, one of their captors asked why they begged only for the lives of the lay people with them. “Do you not fear death?” Bishop Versiglia responded calmly, “We are priests; why should we fear death?” As they watched the pirates rummage through their luggage, the two saints heard each other’s confessions. The other captives were then released. Father Caravario and Bishop Versiglia were shot.

The image never left these women: as they cowered in the bottom of the boat, their fathers fought for them tooth and nail, were beaten for them, and finally died for them. These were no foreign imperialists, no bachelor priests seeking glory in a successful career; these were their fathers, fathers who had laid down their lives for their daughters. Bishop Versiglia and Father Caravario had filled the chalice with their blood, never once hesitating to give their lives for their children. On their feast day (February 25), let’s ask their intercession for all priests and bishops, that they would live as true fathers of their spiritual children, whatever the cost. Sts. Luigi and Callisto, pray for us.