How can I foster a relationship with my guardian angel? 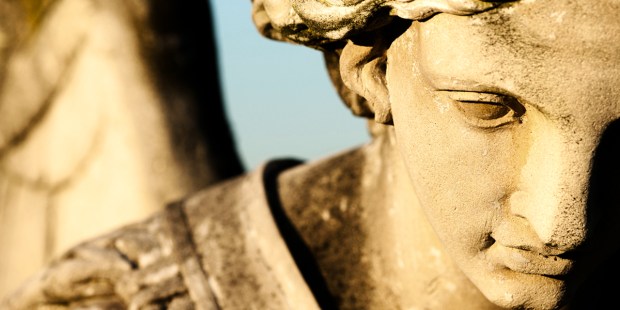 To start, it’s a good idea to greet them and ask for their assistance during the day.

God has given each of us a guardian angel to accompany us on our journey to heaven and eternal life. But how should we interact with this spiritual being who is always with us?

First off, we should think of our guardian angels as friends. There aren’t any secrets between us, as they see everything we do. It’s a good idea to greet them and ask for their assistance during the day.

And why not also form the habit of mentally greeting the guardian angels of those we meet?

This will help us to treat the person, whether he be an acquaintance or a family member, with the respect his human dignity deserves.

Angels know things much better than we do. Recall the dialogue Tobias had with the angel Rafael in the book of Tobit 5:5-6:

Tobias said to him, “Do you know the way to Media?” “Yes,” he replied, “I have been there many times. I know the place well and am acquainted with all the routes.”

So we can also ask our angels for advice whenever we’re in a difficult or dangerous situation. Their assistance is important particularly in moments of temptation. Remember, their mission is to keep us from sin and guide us to heaven.

Many spiritual greats have given us insights into how to foster a relationship with our guardian angels.

According to an account in the Encyclopedia of Angels, Pope Pius XI confided to the future Pope John XXIII that when he had a particularly difficult issue to resolve with someone, he would send his guardian angel to first discuss it with that person’s guardian angel. If there was disagreement, he might even ask that person’s guardian angel to help him to understand the other’s point of view. The accord of the angels, the pope said, would make it easier for the human interlocutors to come to an agreement.

Read more: Padre Pio on listening to your guardian angel

O thou who speedest through all space
More swiftly than the lightnings fly!
Go very often, in my place,
To those I love most tenderly.
With thy soft touch, oh! dry their tears;
Tell them the cross is sweet to bear;
Speak my name softly in their ears,
And Jesu’s name, supremely fair.

It’s also good to remember that not only people have guardian angels, but that corporations, parishes, dioceses, cities and other entities are dedicated to the care of the angels.

When St. John Vianney arrived to Ars, sensitive as he was to the spiritual realm, he greeted the angel of the parish and the guardian angels of all his parishioners.

St. Francis de Sales, in a letter to a bishop, recommended that he invoke the angel of his diocese.

And in Portugal, there is a feast for the angel of the country, the same one who appeared to the little shepherds of Fatima.

What’s most important is that we try to imitate the guardian angels, seeking to be like angels for other people, doing all we can to assist their journey to heaven, where one day, all of us together, saints and angels, will contemplate the face of God.