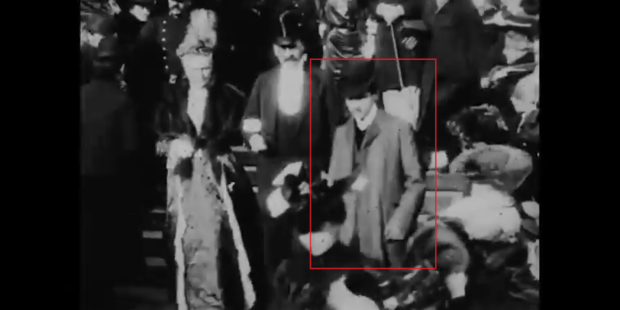 A recently discovered video appears to bring us Marcel Proust, author of the classic Rememberance of Things Past (more recently translated as In Search of Lost Time). According to The New Yorker:

If the man in the film is indeed Proust, it is telling that he appears to be the odd one out in both dress and social arrangement. Proust was, in many ways, an outsider in Parisian society—a bourgeois who frequented the salons of the aristocracy, a Jew who circulated in a world of gentiles, a homosexual in a world preoccupied with lineage. He was famously obsessed with the Comtesse de Greffulhe, and through mutual friends did everything he could to be invited to the parties where she would be in attendance.

French-Canadian film professor Jean-Pierre Sirois-Trahan, The New Yorker reports, was going through film in the CNC French Film Archives when he found one labeled “Greffulhe Wedding.” He recognized Greffulhe as the name of a countess who inspired Proust, and further inspection of the frames lead to the discovery of the possible lone figure of Proust proceeding down the stairs to the church between couples entering the ceremony.