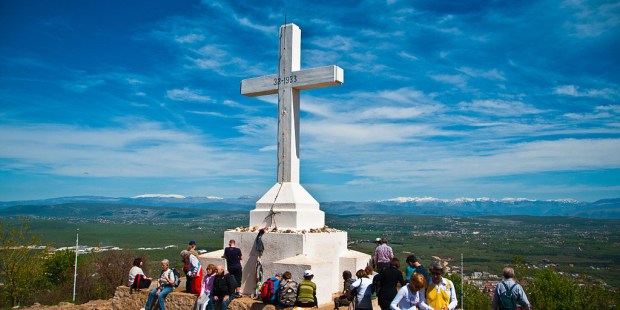 Pope Francis appointed a special envoy to the city of Medjugorje, where millions of pilgrims travel every year.

In Medjugorje, a small town in Bosnia and Herzegovina where the Blessed Virgin appeared to six people over the last 36 years, pilgrims flock in and testimonies of graces abound. While the Holy See continues to exercise prudence on the case, Pope Francis has nevertheless appointed a special envoy this past February 11th, whose mission will be purely pastoral.

Each year, more than two million people go on pilgrimage to Medjugorje, where six people have said they have regularly seen and heard the Virgin Mary, since June 1981. High prelates like Cardinal Christoph Schönborn have travelled to this small rural town in Herzegovina. A strong spirituality around the sacrament of penance and reconciliation has developed there and many people give testimony of diverse received graces.

Nevertheless, the Holy See is proceeding with great caution in this matter. Early in 2014, a special commission, which was set up in 2010 at the request of Pope Benedict XVI in order to study this specific case, concluded its work but, so far, there have been no public statements on the matter.

Pope Francis continues walking through this path of prudence by limiting the mission of his special envoy, Bishop Henryk Hoser, to a pastoral one. The prelate is only responsible for obtaining information on the requirements of the faithful who go to Medjugorje on pilgrimage. Bishop Hoser, who is the archbishop of the Polish diocese of Warszawa-Praga, should therefore restrain from making any claims on the veracity (or not) of the apparitions themselves.

To date, the official position of the Catholic Church is stated on the “Declaration of Zadar,” of the Episcopal Conference of the former Yugoslavia, in 1991. It stipulated that there was no certainty about the supernatural origin of any of the events in Medjugorje. In fact, since the beginning of the apparitions in 1981, no Pontiff has ever said anything official on Medjugorje during their pontificate.

Pope Francis, like his predecessors, has a great devotion to the Virgin of Fatima, whose apparitions were recognized in 1930: he will go on a pilgrimage to the Portuguese sanctuary this coming May 13th, the date in which the centenary of the apparitions will be celebrated.