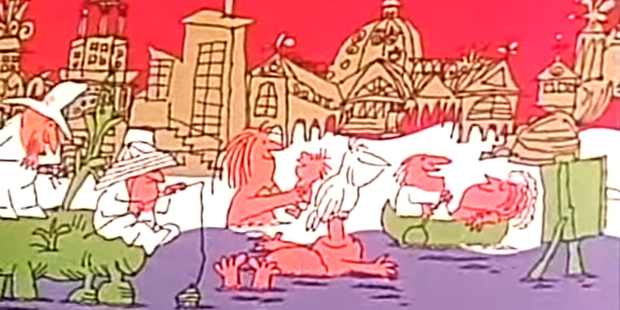 Back in 1971, Orson Welles narrated this brief animated parable, which depicts the dangers of allowing the river of freedom to grow stagnant. The foreboding vision of a paradise turned toxic wasteland, accompanied by primitive artwork, is made all the more chilling thanks to the voice of Charles Foster Kane.

Funnily enough, the creators of this short were never sure Welles would be a part of it until they received his recording. Openculture has the story from writer Joseph Cavella:

For several years, Bosustow Productions had asked Orson Welles, then living in Paris, to narrate one of their films. He never responded. When I finished the Freedom River script, we sent it to him together with a portable reel to reel tape recorder and a sizable check and crossed our fingers. He was either desperate for money or (I would rather believe) something in it touched him because two weeks later we got the reel back with the narration word for word and we were on our way.