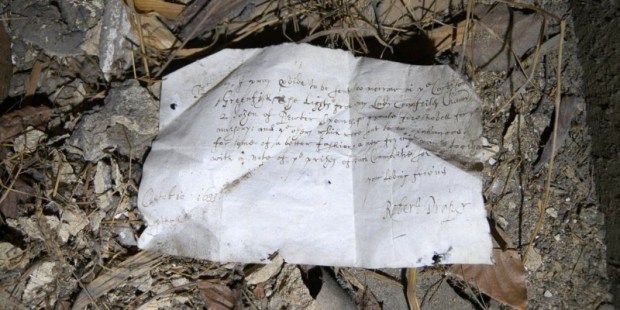 If you were a servant for a wealthy British family in the 17th century, what would you have on your shopping list? A recent discovery made by archeologists in Kent, England, gives us some idea.

An article at ati says that while helping to restore a famous historic home called Knole House, which was built in the 15th century and surrounded by a thousand acres of forest, archeologists found a number of hand written notes under the floorboards, one a shopping list in very good condition.

Written by one Robert Draper to a Mr. Bilby, the shopping list includes pewter spoons, a frying pan, and “greenfish,” which is now known as unsalted cod. It also asks Mr. Bilby to send a “fireshovel” and “lights” to Copt Hall, which is 36 miles away on the other side of London.

It is believed the servant who wrote the list was a high-ranklng one since the text is beautifully written.

“It’s extremely rare to uncover letters dating back to the 17th century, let alone those that give us an insight into the management of the households of the wealthy, and the movement of items from one place to another,” Nathalie Cohen, the regional archaeologist for the National Trust, told Kent Live.