How Korea evangelized itself 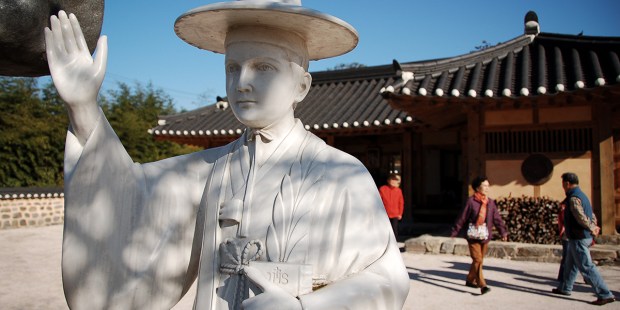 Though there was only one priest in all of Korea for the first 50 years of Christianity, Yi Byeok and his companions helped spread the faith that thrives today.

The history of the Church is driven by missionaries, brave men and women who left family and homeland behind to engage alien cultures, risking their lives to introduce strangers to the love of Jesus. Every country has its founders: St. Francis Xavier in 16th-century Japan, St. Augustine of Canterbury in 6th-century England, St. Thomas in 1st-century India.

In Korea, the story is different.

Korea wasn’t introduced to the gospel by a charismatic priest or a company of selfless friars. Korea, in fact, is the only country that evangelized itself. More than two centuries after Xavier brought the Gospel to Japan and more than a millennium after Nestorians first preached Christ in China, there had still been no mission to Korea. The occasional Christians had entered the peninsula, of course, mostly for trade or military expeditions, but still nobody had preached Jesus to the people.

But a handful of Christian books had come to Korea, studied by Buddhist sages and others who were intrigued by Christianity as a foreign philosophy, not a religion. Among these was Yi Byeok, a young man who began in 1770 to study a Catholic book by Servant of God Matteo Ricci, written in Chinese. At only 16, he devoted himself to the study of the faith, gathering other young (and older) men around him at Chon Jin Am, known as the birthplace of Catholicism in Korea.

For 14 years, these men wrestled with the deepest questions of human existence, guided only by a handful of books smuggled in from China. They left behind mother, father, even (in Yi Byeok’s case) wife and child, for the pursuit of truth. Gradually, they became convinced that what they read was true and began to practice it. Every seven days, they would celebrate a sort of Sabbath, though without any way of knowing which day was actually Sunday. They studied and debated and worshiped together, always led by Yi Byeok who was known throughout the region for his wisdom and learning. Older men deferred to him and younger men gave up much to study with him.

Finally, in 1784, Yi Byeok discovered that one of their number, Yi Seung-Hun, had plans to travel to China. Known as “The Hermit Kingdom,” Korea was entirely closed to the outside world with the exception of this annual embassy to China, and Yi Byeok jumped at the opportunity to have contact with Christians. Yi Seung-Hun was sent with instructions to learn all he could, to obtain books and sacred articles, and to seek Baptism. Baptized Peter, Yi Seung-Hun returned to Korea to confer Baptism on the others, notably Yi Byeok, the forerunner, whom he baptized John the Baptist.

The companions then came down from the mountain, going off to evangelize and moving their meetings to Seoul so that the increasing numbers of Christians would be able to attend. Within just over a year, records indicate, there were already more than a thousand Christians in Korea. But the Korean government, extremely xenophobic after having seen the effects of Western imperialism on other Asian nations, was suspicious of this new faith. In 1785, Christianity was outlawed, though there seems to have been very little torture or outright martyrdom until 1801.

As with most things, Yi Byeok was the exception. The center of the movement and clear leader of the new Church, Yi Byeok drew powerful criticism from the government and from his family. Ultimately when he refused to deny his faith, he was locked into his family home. Some sources say he was starved to death, others that his fasting overcame him and he died of exhaustion, but certainly Yi Byeok died as he had lived: completely given over to the Gospel.

After the death of Yi Byeok, Christianity continued to spread. Despite there being no priests at all in the country for the next ten years, the lay Christians went out as missionaries, even attempting to celebrate Mass and hear confessions before discovering that this was impossible for laymen. Though there was only one priest in all of Korea for the first 50 years of Christianity, and that one only for six years before he was martyred, the faith continued to spread. Through persecution after persecution throughout the 19th century and again by Communists during the Korean War, the Church persisted. Today, 10 percent of South Koreans are Catholic and hundreds are Saints, Blesseds, or Servants of God.

The cause of canonization for Servant of God John Baptist Yi Byeok has been brought forward, along with those of his 132 companions. They have no feast day as yet, but Yi Byeok in particular would make an excellent intercessor for those who are seeking truth, especially those who rely on their intellect, that they would be led to a relationship with Jesus. Servant of God Yi Byeok, pray for us!