In Siberia, a church made out of snow 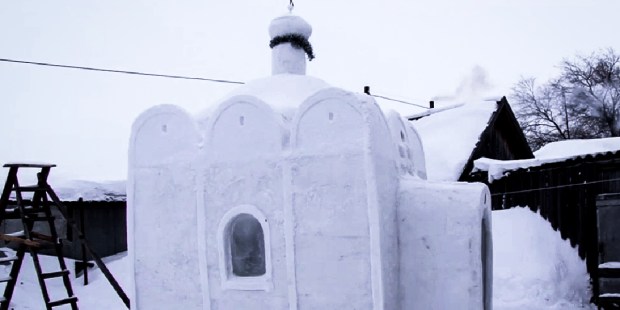 His village had no place of worship. Alexander, an Orthodox Christian, solved that problem.

The small chapel, which measures 10 square meters and has a bell towering more than 4 meters high, fills the villagers of Sosnovka with pride. In spite of the -30 ° C which the thermometer displays on average, they swarm to contemplate the immaculate structure, engraved with the orthodox cross. It has become an attraction in this Russian village, located in northern Kazakhstan, lost in the vastness of Siberia.

Alexander Bityokhina spent a month and a half building his chapel, using the construction material he had at hand: icy snow. “We do not have the means to build a church or even to go to the closest city, Azov,” says his mother Tatyana. She insists that Alexander simply wanted to pray in a real place of worship, and that this is what prompted him to build his snow chapel. He had the idea on his mind for a long time, shared it with the parishioners, and then set about it. This structure is “the voice of his heart,” assures Tatyana Bityokhina, moved by the beauty of the arches and the fineness of the building. “He is a believer,” she adds. “He has put the best of himself into his work.”

Blessed by the Archpriest

Once it was completed, Alexander Bityokhina had his work blessed by an Orthodox archpriest. He baptized his chapel Christorozhdestvenskaya, the Russian name for “birth of Christ.” It has all the elements found in an Orthodox church, including an altar made of snow, icons set in snow niches and a copy of the Bible.

Beware of the Spring

“It’s a real fairy tale,” says one of the churchgoers, admiring the work of his neighbor. Like him, the villagers find it hard to imagine that their new place of worship will melt in six months!

“This small church means a lot to us,” said Sosnovka administrator Iuri Kirsh. And who knows, maybe this is a first step towards building a church in real bricks for this small, remote village of Siberia.