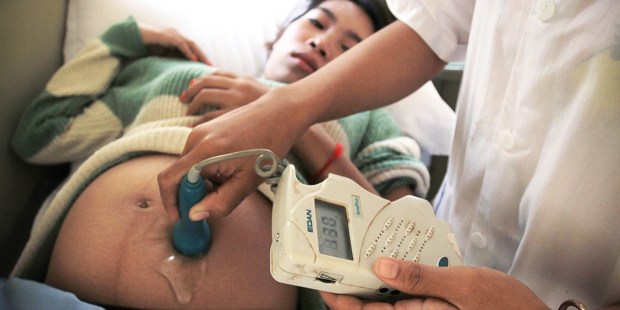 Should doctors be able to withhold health information about a fetus, and should parents be able to sue later?

Last week, on February 27, the Texas Senate Committee on State Affairs unanimously passed a bill on to the full Senate that would prevent parents from suing their doctor if their baby is born with a disability. Committee members approved Senate Bill 25 on an 8-0 vote after hearing several people testify for and against it.

And article in the Star-Telegram reports that opponents claim the bill encourages doctors to lie about whether a child has disability, thus preventing parents from being able to decide whether they want an abortion.

“This bill places a unreasonable restriction on the constitutional right of a woman to make an informed decision about whether or not to have an abortion,” said Margaret Johnson, testifying in front of the committee on behalf of the Texas League of Women Voters. She said the bill “gives medical personnel the opportunity to impose religious beliefs on women.”

Supporters of SB 25 like Jennifer Allmon, executive director for the Texas Catholic Conference of Bishops, said it “doesn’t restrict access to or regulate abortion.” According to the Star-Telegram, Allmon said “the bill protects children with disabilities from having parents going in court to say ‘they wish that child had not been born.’”

“We believe that a lawsuit that begins as its premise that ‘we should’ve had the opportunity to kill our disabled child’ sends a terrible message to those disabled children in Texas,” Allmon said. “To hold a physician financially responsible for a disability he did not cause presumes a level of control over human development that physicians and parents simply do not have.”

Not everyone who testified against the bill did so because of their concerns about abortion access. Rachel Tiddle, a mother who unknowingly carried a child with severe abnormalities said if she had known about her baby’s health issues she would have tried one of many experimental therapies to try and save her baby’s life. Instead, her baby was stillborn.

The bill’s author, Sen. Brandon Creighton, R-Conroe, said that if the legislation passes, parents can still sue doctors under medical malpractice laws. He, and supporters of the bill, believe the current law sends the message that “wrongful births” are real and discriminates against children born with disabilities.