Did Natural Family Planning just get a whole lot easier? 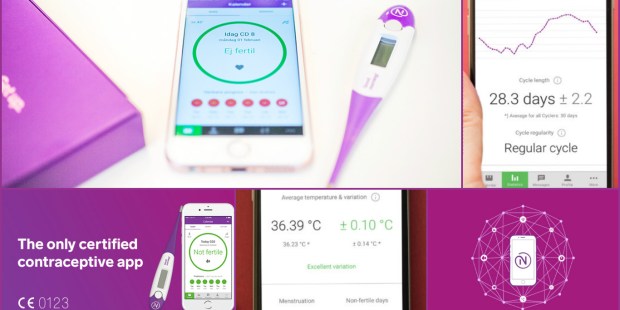 On February 9, Berglund’s start-up, Natural Cycles, became the first-ever fertility tracking app certified as a medical device. Both Berglund, the company’s CTO, and her husband Dr. Raoul Scherwitzl, who serves as CEO, are particle physicists. Berglund herself worked on the Nobel Prize-winning team that discovered the Higgs boson particle, but she left the team in 2012 to start Natural Cycles, in an effort to get off of birth control.

“I wanted to give my body a break from the pill,” she told WIRED back in October, while Natural Cycles was waiting for regulatory approval. “But I couldn’t find any good forms of natural birth control, so I wrote an algorithm.”

Natural Cycles is based on that algorithm that Berglund began writing while searching for the “God particle” at CERN in Switzerland. The app’s functionality is simple: Women take their temperature every morning and input it into the app, which then calculates whether it’s a “green day” or a “red day.” A green day means the woman is not in her fertile period, whereas a red day signifies that a woman has entered the fertile part of her cycle and therefore she may become pregnant from unprotected sex. The temperature reading works because after ovulation, release of the hormone progesterone slightly raises a woman’s body temperature.

“The biggest change is in the way we talk about Natural Cycles,” Berglund said on the company’s blog. You can already see the difference on the company’s website, where a banner reads: “The only certified contraceptive app.”

“We can now proudly say that Natural Cycles is an effective contraceptive, comparable with others like the pill, the IUD and condoms,” Berglund said. It’s also important to note that Natural Cycles, like all other NFP methods, can work just as effectively in helping couples who are trying to conceive, which Berglund and Scherwitzl did back in 2013, with a little help from their app.

While Berglund created Natural Cycles in order to get off the pill, the company’s interchangeable use of “contraception” and “natural family planning,” as well as its characterization of the app as a less-invasive version of the IUD or the pill, evinces that, whatever its merits, Natural Cycles was not borne of religious or moral convictions.

Nevertheless, Ann Gundlach of the Couple to Couple League remarked that any advance in making natural family planning easier for families counts as a positive step.

“We applaud the development of all products that could make the use of fertility awareness methods easier or more effective for married couples,” Gundlach told Aleteia. But she offered a word of caution as well.

“An app is a handy tool, but couples should get the training and body knowledge so that they don’t have to rely heavily on the app. It’s best for couples to understand their method themselves.”

Gundlach’s organization, the Couple to Couple League (CCL), is a Catholic non-profit dedicated to linking married and engaged couples to volunteer couples who have been professionally trained to teach natural family planning.

“We believe learning and practicing NFP helps couples learn how to love one another fully and unselfishly,” the Couple to Couple League’s website says. “This translates into happy, stable marriages and families, open to life and sexual virtue.”

While unselfish love and sexual virtue certainly constitute a more holistic vision than just an app with green days and red days, Gundlach pointed out that the Couple to Couple League does have its own app and fertility tracking program as well, which is called CycleProGo. And these aren’t the only two apps that help couples with NFP. There are dozens.

The medical organization FACTS (which stands for Fertility Awareness Collaborative to Teach the Science of the natural methods) actually ranked the effectiveness of these apps. CycleProGo came in eighth. Natural Cycles, 15th.

Even with the higher ranking, however, CycleProGo is unlikely to be applying for medical certification anytime soon.

“It would be beyond the financial capability of CCL, for instance, to undertake the research needed to get our CycleProGo™ app approved, even though the FACTS group ranks our app higher in effectiveness and reliability than the Natural Cycles app,” Gundlach said.

Nevertheless, Natural Cycles was no effectiveness slouch in its clinical trials. One such trial followed 4,000 women ages 20-35 over the course of one year. That year, there were 143 unplanned pregnancies, but only ten of them occurred on “green days,” when the app told them they were not fertile. This comes out to a 99.5% “efficacy rating”—equal to that of the birth control pill.

Medical certification, or the lack thereof, doesn’t technically make a difference to women wishing to download Natural Cycles, CycleProGo, or any of the other fertility tracking apps. They are available in the United States—they just can’t be advertised here as FDA-approved medical devices.

[Clarification: CycleProGo can be downloaded for free but that is not a fully functioning version. To get all of the functionality, there is a subscription fee of $5.00/month, with discounts for pre-paying. Also, all students taking the Couple to Couple League main NFP class get free access to CycleProGo for up to a year.]