Pope Francis calls for end to “mediocrity, banality and superficiality” in liturgical music 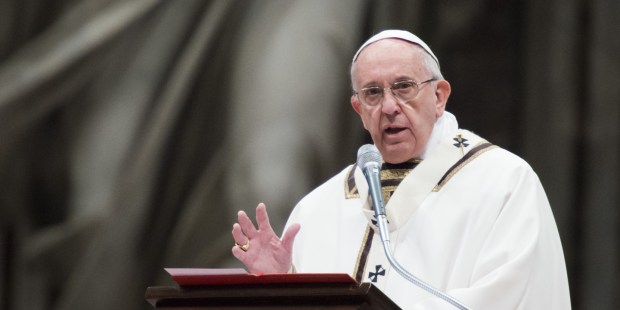 VATICAN CITY — Pope Francis has called for an end to the “mediocrity, superficiality and banality” that has entered into liturgical music in the Catholic Church since Vatican II.

Such banal music, the pope has said, has been detrimental to the “beauty and intensity of liturgical celebrations,” and can hinder clergy and faithful from “participating intensely in the mystery of God” made present at each Holy Mass.

The pope’s remarks came in an address to participants in a conference on sacred music held at the Vatican, March 2-4. The conference marked the fiftieth anniversary of the promulgation of Musicam Sacram, an Instruction which outlined the proper implementation of norms regarding sacred music contained in the Second Vatican Council’s Constitution, Sacrosanctum Concilium.

I am delighted to meet all of you who have come to Rome from different countries to participate in the conference on “Music and Church: Cult and Culture, fifty years after Musicam Sacram,” organized by the Pontifical Council for Culture and the Congregation for Catholic Education, in collaboration with the Pontifical Institute of Sacred Music and the Pontifical Liturgical Institute at the Atheneum of St. Anselm. I cordially greet you, beginning with Cardinal Gianfranco Ravasi, whom I thank for his introduction. I hope that the experience of encounter and dialogue over the course of these days, in common reflection on sacred music and particularly on its cultural and artistic aspects, will be fruitful for your ecclesial communities.

Half a century after the Instruction Musicam sacram, the conference has chosen to explore, from an interdisciplinary and ecumenical perspective, the current relationship between sacred music and contemporary culture, between the musical repertoire adopted and used by the Christian community and prevailing musical trends. Also of great importance was its reflection on the aesthetic and musical formation of both clergy and religious and the laity engaged in the pastoral life, and more directly in the scholae cantorum.

Indeed, the first document issued by the Second Vatican Council was the Constitution on the Liturgy, Sacrosanctum Concilium. The Council Fathers keenly perceived the difficulty of the faithful of participating in a liturgy whose language, words and signs they did not sufficiently understand. To implement the essential features outlined by the Constitution, Instructions were issued, including the one on sacred music. Since then, although new documents of the Magisterium have not been produced on the subject, there have been several significant papal interventions which have guided reflection and pastoral efforts.

The premise of the aforementioned Instruction is still very timely: “Liturgical worship is given a more noble form when it is celebrated in song, with the ministers of each degree fulfilling their ministry and the people participating in it. Indeed, through this form, prayer is expressed in a more attractive way, the mystery of the liturgy, with its hierarchical and community nature, is more openly shown, the unity of hearts is more profoundly achieved by the union of voices, minds are more easily raised to heavenly things by the beauty of the sacred rites, and the whole celebration more clearly prefigures that heavenly liturgy which is enacted in the holy city of Jerusalem” (Musicam sacram, n. 5).

Several times the document, following the Council’s directives, highlights the importance of the participation of the entire assembly of the faithful, called “active, conscious, and full,” and also underlines very clearly that “the true solemnity of liturgical worship depends less on a more ornate form of singing and a more magnificent ceremonial than on its worthy and religious celebration” (n. 11). It is, therefore, first of all a matter of participating intensely in the mystery of God, in the “theophany” that takes place in every Eucharistic celebration, in which the Lord makes himself present among his people, who are called truly to participate in the salvation realized by the crucified and risen Christ. Active and conscious participation consists, therefore, in knowing how to enter deeply into this mystery, in being able to contemplate, adore and welcome it, in perceiving its meaning, particularly through religious silence and the “musicality of the language with which the Lord speaks to us” (Homily at Santa Marta, December 12, 2013). It is in this perspective that we base the reflection on the renewal of sacred music and its valuable contribution.

In this regard a dual mission emerges which the Church is called to pursue, especially through those who, in various capacities, work in this field. On the one hand, it is a matter of safeguarding and promoting the rich and varied heritage inherited from the past, using it in a balanced way in the present, and avoiding the risk of a nostalgic or “archaeological” vision. On the other hand, it is necessary to ensure that sacred music and liturgical chant are fully “inculturated” in the current artistic and musical languages; that they are able, that is, to embody and translate the Word of God in songs, sounds, and harmonies that make the hearts of our contemporaries throb, also creating an appropriate emotional atmosphere that disposes one to faith and arouses a welcoming and full participation in the mystery that is celebrated.

Certainly the meeting with modernity and the introduction of vernacular languages into the Liturgy has raised many problems: of musical languages, forms and genres. At times, a certain mediocrity, superficiality and banality have prevailed to the detriment of the beauty and intensity of the liturgical celebrations. That is why the various actors in this field, musicians and composers, conductors and singers in scholae cantorum, and those involved in the liturgy, can make a valuable contribution to the renewal —especially in quality — of sacred music and liturgical chant. To facilitate this process, we need to promote proper musical formation, also for those who are preparing to become priests, in dialogue with the musical trends of our time, with organizations representing the different cultural spheres, and with an ecumenical attitude.

Dear brothers and sisters, I thank you again for your commitment in the field of sacred music. May the Virgin Mary, who in the Magnificat sang of God’s merciful holiness, accompany you. I encourage you not to lose sight of this important objective: to help the liturgical assembly and the people of God to perceive the mystery of God and participate in it with all the senses, both physical and spiritual. Sacred music and liturgical chant have the task of giving us the sense of God’s glory, of his beauty, of his holiness which enwraps us like a “luminous cloud.”

I ask you please to pray for me and I warmly impart the Apostolic Blessing.