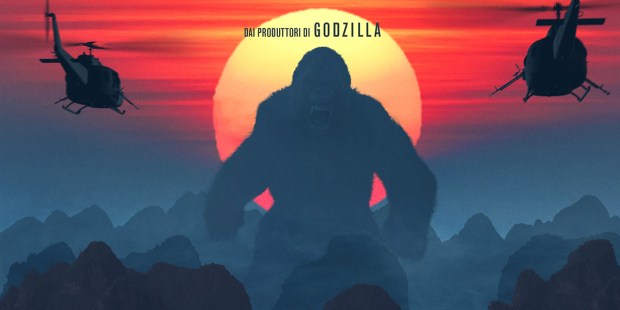 High-budget action flick doesn’t try to be anything more than a film about a super-sized simian punching other monsters in the face.

In one of his many revisits to the original 1933 King Kong, Roger Ebert admitted to having torn feelings on the film. He considered it a “low-rent monster movie… [which] pointed the way toward the current era of special effects, science fiction, cataclysmic destruction, and nonstop shocks.” Nevertheless, he also admitted the film managed to remain “a curiously touching fable.”

To somewhat varying degrees of success, the subsequent remakes headed by Dino De Laurentiis and Peter Jackson did their best to hold on to that bit of heart found in Merian C. Cooper’s masterpiece. Director Jordan Vogt-Roberts’ new take on the tale, Kong: Skull Island, on the other hand, doesn’t even bother. It starts right off with cataclysmic destruction and rarely goes anyway else. Oddly enough, that approach seems to have resulted in what is perhaps the most enjoyable King Kong movie since the original.

Set near the end of the Vietnam war, the movie deals with a joint civilian/military effort to explore the titular island, the existence of which has been recently revealed by nascent satellite technology. Heading up the civilian side of things is Bill Randa (the ever-gregarious John Goodman), who ostensibly wants to prospect the place for potential undiscovered resources. Alert viewers who paid attention to the recent American version of Godzilla, however, will recognize the name of the organization Randa works for and have good reason to suspect his motives.

The military side of the operation is headed up by Colonel Preston Packard (PG-13 rated Samuel L. Jackson), a many-medaled veteran still feeling the bitter sting of the United States’ inglorious retreat from Vietnam. Also along for the ride are wilderness tracker supreme James Conrad (a heroically wooden Tom Hiddleston) and award-winning photographer Mason Weaver (equally award-winning Brie Larson). Together with a couple of dozens of disposable soldiers and crewman, they all helicopter to Skull Island to see what they can find.

Unfortunately, Randa’s decision to set off exploratory explosives doesn’t sit well with the guardian of the island’s ecosystem, and it isn’t long before Kong shows up to repel the ‘invaders.’ The civilian survivors of Kong’s attack are rescued by Hank Marlow (John C. Reilly), a World War II pilot who was taken in by the island’s Kong-worshiping native inhabitants after crash landing there 30 years earlier.

It cannot be overstated just how much the introduction of Marlow breathes life into the film. While the movie has trudged along nicely as an action picture up until this point, Reilly’s wild-eyed madman cements the fact that none of this is meant to be taken very seriously. Once Reilly starts chewing up the scenery, you know it’s time to just sit back, eat your popcorn, and be entertained.

Marlow leads the motley group to the tribe’s walled village where they learn the history of Kong and the multitude of monsters the big ape protects the world from. Meanwhile, driven mad by one too many ignominious defeats, Preston goes full Ahab and assembles his reluctant forces to try and wipe Kong from existence.

The problem, of course, is that if Preston succeeds in his obsessive vendetta, the creatures Kong has held in check all these years will be free to roam the Earth at will. With Kong constantly referred to as Skull Island’s deity, it’s hard not to read a bit of a jab at atheism into this scenario. Man wants to remove God from the picture, but by doing so, he will create a literal Hell on Earth. It’s maybe not the deepest of theological insights, but then again, this is fundamentally a film about a super-sized simian punching other monsters in the face. There’s only so deep it’s ever going to get.

Still, that’s not to say Kong: Skull Island has no heart at all. The movie does make an effort to add a touch of tenderness by portraying Kong’s loneliness as the last of his kind. It’s impossible not to feel a little pang of sympathy for the sad ape as he sits alone on a mountaintop sighing at the moon. The movie also devotes just enough time to developing its supporting players so that they aren’t just nameless cannon fodder for the various beasties trying to stomp, crush, and eat them.

But make no mistake, the stomping, crushing, and eating remains the main focus of the film. And that’s okay. While its mega-million-dollar budget may prevent the picture from being just another “low rent monster movie,” there is never any pretense on the part of the filmmakers that Kong: Skull Island wants to be anything other than a whiz-bang popcorn flick that leaves its audience smiling. And in that, it succeeds admirably.