Marthe Robin: Her only sustenance for more than 50 years was the Holy Eucharist 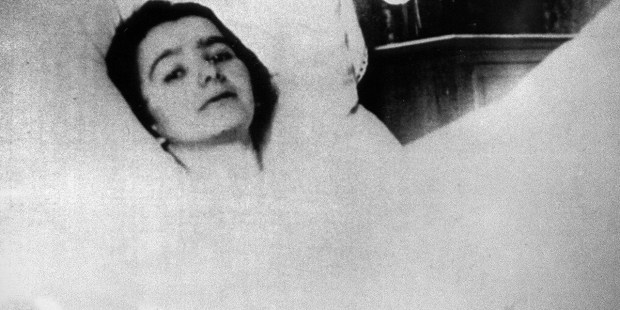 She proved that it’s possible to live on love alone.

Marthe Robin was born on March 13, 1902, in Drome, France. She was the sixth and last child of Joseph and Amelie-Celestine Robin, who were farmers. Her parents worked hard and would have been considered, if living during present times, middle class. Her mom and dad were Catholic but did not attend church. This impacted the faith of their other children but did not affect Marthe. She was drawn to God and was praying on her own at a very early age.

Illness struck Marthe in her second year of life. She and her sister, Clemence, both caught typhoid fever. Clemence did not survive. Marthe did live but was weak and frail from then on. She left school at the age of 13 to help on the family farm. However, she did attend her catechism classes and was confirmed in 1911. She made her first Holy Communion on August 15, 1912.

Although she had been sickly ever since the typhoid fever, she seemed to be enjoying her teenage years. She was happy-go-lucky, loved dancing and laughed heartily at Grandma’s funny jokes. But in 1918 she fell ill again and was bedridden. Doctors thought it might be a brain tumor or encephalitis. They really did not understand what her illness was until one of them diagnosed her as having Hysteria. She had been “labeled.”

By 1928, Marthe’s lower body was paralyzed and by 1929 so were her arms. It was not a result of  hysteria. Finally, without proof, her condition was called Encephalitis Lethargica, a rare form of encephalitis. This was never confirmed.

Marthe was living at home in a dark bedroom due to her hypersensitivity to light. By the age of 28, she was completely paralyzed and bedridden. Early on she still could use her thumb and forefinger and was able to finger her rosary beads. Eventually she lost the ability to do even that. All she could do was move her head. She could no longer eat or even take a sip of water. Doctors tried to force water down but it would come out her nostrils. There was, however, one thing she could and would consume. That was the Holy Eucharist.

At the beginning of her illness, Marthe was visited by Our Blessed Mother who comforted her greatly. Sometime during the year of 1928, Christ Himself appeared to her and this apparition changed her forever. This is when she decided to “offer herself over completely to God” and to “offer her sufferings in union with Him by prayer and love.” She became more and more focused on Christ’s Passion while becoming extremely close to Our Lady.

From the 1930s onward, Marthe’s only sustenance was Christ in the Eucharist. No food or water would ever pass her lips. On Fridays, when she received Holy Communion, she would relive the Passion of Christ. At first it was spiritually but then it became physical. Marthe was visibly imprinted with the stigmata. God had included her among the select such as St. Francis, St. Catherine of Siena and St. Padre Pio.

As the triduum of Our Lord’s Passion, Death and Resurrection took place within Marthe, the blood would be wet and fresh on Friday, dry on Saturday and gone on Sunday. Indeed, Marthe Robin experienced the Holy Eucharist in an extraordinary way. This would be her life until she died in 1981, a period of 51 years.

Even though Marthe never finished grade school she was able to counsel many who visited her with great words of wisdom. She possessed an overflowing sense of compassion and had an exceptional memory. During her lifetime it is estimated that more than 100,000 people visited her and received guidance from her. She honored thousands of prayer requests and her influence reached far beyond her small bedroom.

Pope Francis declared Marthe Robin venerable on Nov. 7, 2014. Today an average of 40,000 people a year visit and pray at the home where Venerable Marthe lived and died. Marthe was quoted as saying, “I want to cry out to those who ask me if I eat, that I eat more than them, for I am fed by the Eucharist of the blood and flesh of Jesus. I would like to tell them that it is they who arrest and block the effects of this food in themselves.”

Learn more about the extraordinary life of Marthe Robin here.