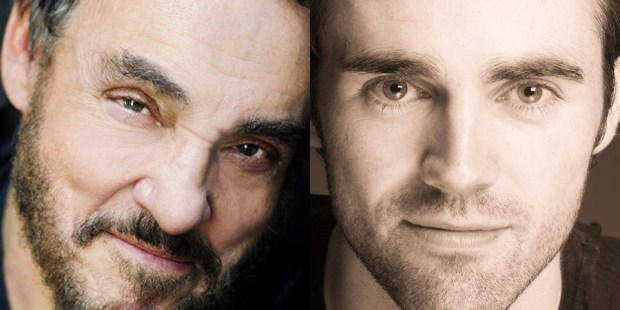 Featuring the talent of John Rhys-Davies, the life of Saint Patrick as you have never heard it before

Saint Patrick’s remarkable and inspiring life is now being told in a unique way in an 8-part audio dramatization produced by Augustine Institute Radio Theatre (AIR Theatre) and featuring a stellar cast and top-notch production. Written and directed by Paul McCusker, The Trials of Saint Patrick follows “one man’s spiritual odyssey through hardship and loss, mercy and forgiveness.”

McCusker is well-known for his previous work with Focus on the Family, producing multiple award-winning audio dramatizations including The Chronicles of Narnia, The Screwtape Letters, C.S. Lewis At War, the classics A Christmas Carol, Oliver Twist and Les Miserables, and original works like The Father Gilbert Mysteries and The Luke Reports. He now works for the Augustine Institute as the  Director of Content Creation and in addition to writing new audio dramas has contributed to various video productions, such as Beloved.

When approached to write and direct audio dramas about Catholic saints, McCusker related in an interview with Aleteia that he was hesitant at first.

I actually balked to be honest because I thought, “Oh, aren’t Catholics really tired of stories about saints?” They’re like the older brother who’s perfect and they’re always throwing them in your face about how you don’t measure up.

However, when he started researching and reading the lives of the saints, McCusker discovered that these holy people had many of the same struggles that we have.

What I found when I started digging into the life of St. Francis [for the first audio drama], there was much more to him than a superficial understanding that I had. After St. Francis we said, “Well, what should we do next?” and the obvious choice seemed to be Patrick because he’s one of the world’s most popular saints along with Francis, and well known. I started digging and said, “Okay, but what’s his story?” because if there isn’t a good story here then there’s no point trying to bring a non-story to life. I started researching and digging into his life and I found this amazing and compelling story, this whole spiritual journey. It’s epic in terms of what he went up against when I dug into the history of the times and the culture, everything he was up against.

Motivated to relate the inspiring life of Saint Patrick, McCusker assembled an all-star cast to enthrall listeners in the story. Actor John Rhys-Davies plays the elder Patrick and is best known for his roles in blockbuster hits such as Raiders of the Lost Ark, Indiana Jones and the Last Crusade and The Lord of the Rings trilogy. The younger Patrick is expertly played by actor Seán O’Meallaigh, who has starred in the recent Vikings TV series. Additionally, the Trials of Saint Patrick possesses a mesmerizing soundtrack that transports a person into ancient Ireland.

McCusker hopes that these new audio dramas will inspire listeners to be a beacon of light in their own circumstances and bring God to the world.

The big takeaway will always be simply this. We are all called to our times whether you are C.S. Lewis or Dietrich Bonhoeffer or Francis or Patrick. God calls men and women to their times to serve him and to have an impact in very large and small ways. The men and women who became saints struggled with all the things we struggle with. One of the things that I got from researching all of this is how very human they were. They weren’t like instant saints. They went through the fire, and thought to obey God and struggled with their temptations, struggled with pride, struggled with a lot of things. They are not saints in a nutshell. The takeaway is, can we be inspired to become the men and women for God in our generation, in our culture, in our homes, in our time and place as they did.

The Trials of Saint Patrick is not the first audio drama to be released by the Augustine Institute, which previously released a story based on the life of Saint Francis entitled Brother Francis. It too was beautifully produced and features the voices of Raffey Cassidy (Tomorrowland) and Harry Lloyd (The Theory of Everything) among others.

The hope is to use this classic method of storytelling to reach a new generation. With the availability of mobile devices and in a culture that is always on the move, audio dramas have the ability to reach people wherever they go, whether it is in the car, on the treadmill or at home. There are plans to produce many more audio dramas in the future covering a wide range of spiritual figures and inspiring stories.

The Trials of Saint Patrick will be released this week on Saint Patrick’s Day (March 17, 2017) and will be available through the Augustine Institute Radio Theater.