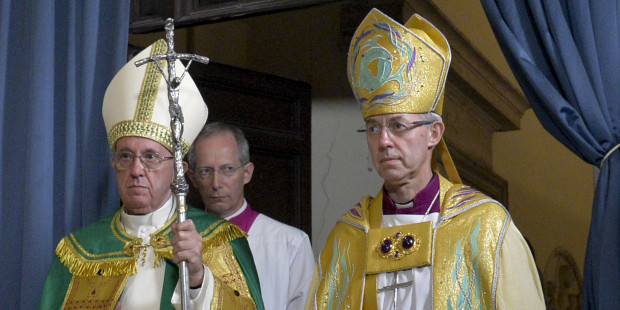 VATICAN CITY — Today, for the first time ever, Anglican Choral Evensong was celebrated at the altar of the Chair of St. Peter in St. Peter’s Basilica at the Vatican.

Anglican Archbishop David Moxon, director of the Anglican center in Rome, presided at the 3 pm service, with music sung by the Choir of Merton College, Oxford. Archbishop Arthur Roche, Vatican Secretary of the Congregation for Divine Worship and the Discipline of the Sacraments, preached a homily. Pope Francis did not attend.

Permission for the occasion was granted by Cardinal Angelo Comastri, Archpriest of St. Peter’s Basilica, during a recent meeting with Archbishop Moxon.

The event comes just five months after Pope Francis and Archbishop Justin Welby, Anglican archbishop of Canterbury, celebrated Vespers together at the Basilica of San Gregorio al Celio in Rome.

It also comes on the heels of Pope Francis’ historic visit to the Anglican Communion in the church of All Saints in Rome last month, to mark the 200th anniversary of its founding. During the visit, the pope blessed a new icon commissioned for the church, participated in Evensong, and together with Anglican clergy renewed their baptismal vows as a sign of communion.

Pope Francis is the first pontiff to set foot inside an Anglican church in his own diocese of Rome.

Full communion does not yet exist between the Catholic Church and the Anglican Communion, due in part to divergent beliefs regarding the papacy, the priesthood, and the Holy Eucharist, and other matters of faith and doctrine.

A Path to Rome

Nevertheless, in the last decade, great strides have been made to open a path to those of the Anglican tradition who wish to be in full communion with the Roman Catholic Church, while retaining elements of their worship traditions and spiritual heritage.

On November 4, 2009, Pope Benedict XVI established what are called “Personal Ordinariates” to provide a path for groups of Anglicans to become fully Roman Catholic.

More to read: Why I feel called to the Anglican Ordinariate

For more information on the Personal Ordinariate of the Chair of St. Peter, visit their site here.

More to read: Pope Francis calls for end to “mediocrity, banality and superficiality” in liturgical music