Francis and us: A beautiful combination 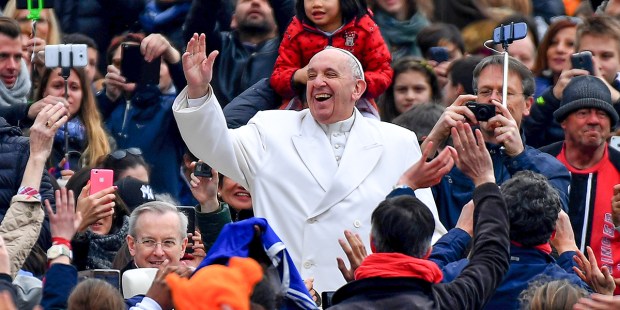 Catholics and the pope, four years in …

If Pope Francis were a president, would he be re-elected?

It’s an irresistible question to ask on the four-year anniversary of Pope Francis’ March 13, 2013 election. After all, Pope Benedict XVI resigned the papacy after eight years — a “two-termer,” in presidential parlance.

And clearly there are some cardinals who would not support a re-election effort if one were called for.

So what do we do when we think the pope is wrong? Or, not only wrong, but wrong-headed? When the pope’s mixed signals, unsettling Vatican conferences and off-the-cuff remarks, alarm and offend us?

First, here’s what not to do: Don’t go on social media to oppose the pope and tie him to doctrinal error.

Zinging the pope either does nothing — since we layfolk don’t have a say in these matters — or it does real harm: It encourages dissenters, frightens the faithful, and emboldens anti-Catholics.

The worst damage it does is to the biggest group of people in our audience: People who don’t care.

For the vast number of people who simply don’t care about religious matters at all, our Pope Francis fights look absurd. When they see our scuffles over issues that are entirely lost on them, they will gird the loins of their religious apathy, set defensive shields around it, and do all in their power to keep the craziness of religious belief far, far away. (This is, indeed, what happened after the Reformation’s acrimonious squabbles, Brad S. Gregory points out.)

So what should we do? Salute and thank the pope for saying things that trouble us?

No. My own approach, both here at Aleteia and in my book What Pope Francis Really Said, has been to do three things.

First, create the Catholic record of this pontificate.

Pope Francis will not be at the head of the Church until the end of time; the successors to Peter, however, will. So in my book I include, and footnote, what Pope Francis actually said on doctrinal matters.

It is true he sometimes neglects to say all he should about key doctrines. But he has often said those important things at some other time. So share his many statements about homosexuality that explain “Who am I to judge?”; share his statements on indissolubility and on communion that balance his “dubious” footnote; just share his embrace of celibacy (“May future priests truly learn to live the demands of priestly celibacy!”) to balance his latest musings in an interview.

Second, amplify the good of this pontificate.

We can and must, as Catholics, identify the keynotes of Pope Francis’ pontificate and amplify them. There are many.

He has made his daily prayer schedule public, for our edification. Let’s imitate as much of it as we can: Daily Mass, Rosary, Eucharistic Hour and breviary and frequent confession.

He has also asked us to evangelize. All of us. All the time.

Put the two together. Tell friends, “I had a great Eucharistic hour. I started because of Pope Francis. Wow. That gives me such peace.” Or tell them, “Okay, I know people kind of don’t mention this, but Pope Francis does so why not? You asked what I did last weekend, and really the highlight for me was confession. I feel like a new person after that!”

The more we imitate Francis’ love for Christ and share it, the more we will be transformed by all that is vital in his message.

Third, fill in the gaps for the newly Catholic or newly interested.

If Pope Francis is making people give the Church a second look, but leaving important things out, then put them back in. And if you feel the pope is dropping the ball on some key doctrine, pick up the ball.

When we die, Jesus will ask us how we answered his call to evangelize. He won’t consider “I complained about Pope Francis” to be a qualifying answer.

He designed Pope Francis and us to be a one-two combination that would drive his truth home.

Let’s not disappoint him.