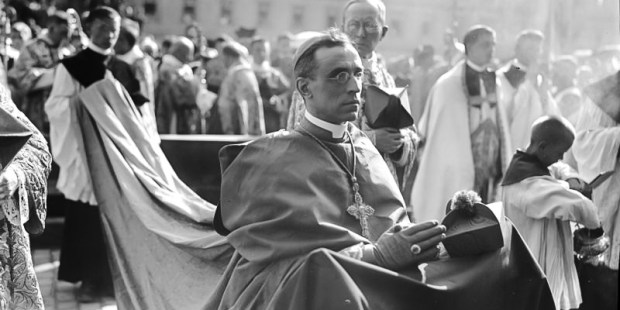 On Palm Sunday in 1937, Germans gathered in churches and heard something that no living human being had heard before: a papal message written in their own language, rather than in the customary Latin.

Tuesday marks the 80th anniversary of that message, an encyclical titled Mit Brennender Sorge. That is the German title, taken from the first three words of the letter, “With burning concern.”

It was an urgent message of Pope Pius XI, written in response to the growing threat of Nazism. But Hitler’s regime had already become so powerful that the encyclical had to be smuggled into the country.

One of the drafters of the encyclical, Cardinal Eugenio Pacelli, then-Vatican Secretary of State, would succeed Pius XI as pope two years later, inheriting the struggle against Nazism. By the end of World War II, he would be roundly praised for his defense of human rights, including his solicitude for the Jews of Europe as they faced a genocide. But then something changed.

At least as far back as 1963, when a German playwright named Rolf Hochhuth published a play titled The Deputy, Pius XII would be accused of having sympathies with the Nazis and passively allowing the Jews to be fed to the lions.

That poor reputation has been changing in recent years, and new evidence continues to emerge to support a rehabilitation of Pius’ reputation.

“The news is that literally all of the books currently being published are now positive and using many of the primary source documents we have published,” said Gary Krupp, president of the Pave the Way Foundation, which has worked to restore Pius’ reputation. “Mark Riebling’s book Church of Spies and the new book Catholics Confronting Hitler: The Catholic Church and the Nazis by Peter Bartley are all proving the truth of the actions of the Church during WWII.”

“Many historians who were either critical or at least neutral toward Pacelli have now come out and totally reversed themselves,” said William Doino, lead contributor to The Pius War: Responses to the Critics of Pius XII. “One of the world’s leading historians on Hitler, Ian Kershaw, who in the past has been highly critical of Pius XII, just came out with a book called To Hell and Back, in which he says, ‘Imputations that he was “Hitler’s Pope,” heartless toward the fate of the Jews, or failed to act because of ingrained antisemitism, are, however, wide of the mark….[He] was far from inactive with regard to the persecution of the Jews.’”

When he wrote a biography of Hitler in 1999, Kershaw had two passages about Pius XII, and they were very negative, Doino pointed out. “He is just one of many very distinguished historians who have reversed themselves. All of the major historians today acknowledge that Pius XII did intervene, did save Jews, was anti-Nazi and was not anti-Semitic,” he said.

Benedictine Father Leo Chamberlain recently wrote in The Catholic Herald in Great Britain that the International Raoul Wallenberg Foundation, a historical research institute, has over the past two years discovered more than 500 places throughout Europe where Jews were sheltered during the war. It is marking such places with a plaque designating them “Houses of Life.”

“To our surprise, we have learned that the overwhelming majority of Houses of Life were institutions related to the Catholic Church, including convents, monasteries, boarding schools, hospitals, etc.,” said Eduardo Eurnekian, chairman of the foundation.

“In Rome alone, some 4,500 people found refuge in churches, convents, monasteries and boarding schools. In Warsaw, All Saints Church sheltered Jews. This was remarkable, because the penalty for Poles for rescuing Jews was the death camp or, more likely, instant execution,” Father Chamberlain noted.

Doino pointed out that recently there have been many revelations from “new testimony, diaries and documentation showing beyond the shadow of a doubt that Pius was directly involved and directly ordered saving Jews inside Rome.”

In a 2015 article in Contemporary Church History, Doino described the wartime diary of the Augustinian Nuns of the convent of the Santi Quattro Coronati, first publicized in 2006. Relating events in the Fall of 1943, we read:

Having arrived at this month of November, we must be ready to render services of charity in a completely unexpected way. The Holy Father, Pius XII, of paternal heart, feels in himself all the sufferings of the moment. Unfortunately, with the Germans entry into Rome which happened in the month of September, a ruthless war against the Jews has begun, whom they wish to exterminate by means of atrocities prompted by the blackest barbarities. They round up young Italians, political figures, in order to torture them and finish them off in the most tremendous torments. In this painful situation, the Holy Father wants to save his children, also the Jews, and orders that hospitality be given in the convents to these persecuted, and that the cloisters must also adhere to the wish of the Supreme Pontiff….

Pacelli, who had served as papal nuncio to Germany from 1917 to 1929, was regarded by the Nazis as “Jew loving.” Father Chamberlain wrote that “Pacelli was regarded as so anti-Nazi that the Third Reich attempted to prevent his election as pope in 1939.”

For at least 50 years, historians and others have tried to paint a picture of Pius XII that is just the opposite. But new evidence seems to be proving that the Nazis were right about Eugenio Pacelli.