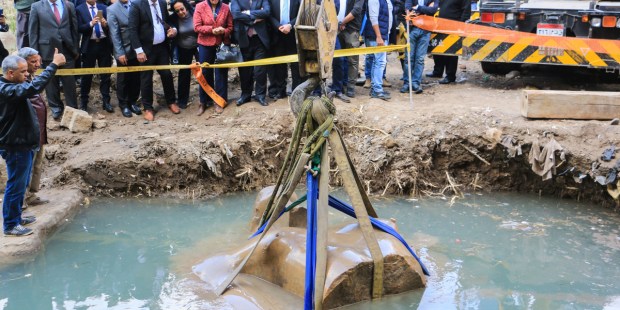 Archaeologists have discovered a massive 3,000 year-old statue of an ancient Egyptian pharaoh in the unlikeliest of places – submerged in muddy water in a poor neighborhood in the capital city of Cairo.

The 26-foot long statue is thought to represent Pharaoh Ramses II, also known as “Ozymandias,” who ruled Egypt from 1279 to 1213 BC.

“Last Tuesday they called me to announce the big discovery of a colossus of a king, most probably Ramses II, made out of quartzite,” Egypt’s Antiquities Minister Khaled al-Anani told Reuters. “We found the bust of the statue and the lower part of the head and now we removed the head and we found the crown and the right ear and a fragment of the right eye,” Anani said.

CNN reported that archaeologists expect to find the torso section of the statue as well, but it could prove difficult to remove. Dietrich Raue from the University of Leipzig, who heads the German team of archaeologists involved in the joint German-Egyptian excavation, said,

“I’m rather sure that [the hips and legs] will be there, but the problem is we’re in the middle of the city, and the bottom part may be very close to the houses. It would be dangerous to excavate closer to the houses, so probably we will not get the bottom part.”

According to a report in Reuters, a Egyptian-German expedition made the finding in the ancient city of Heliopolis, which was founded by Ramses as a temple to the sun god. It was destroyed in Greco-Roman times, and many of its artifacts were looted and moved to Alexandria or Europe.

Ramses the Great, as the pharaoh was known, was the third ruler of the Nineteenth Dynasty of Egypt, which under his rule expanded from Syria in the east to Nubia in the south. He was immortalized in the poem by British poet Percy Shelley’s sonnet “Ozymandias,” which reflected on the fleeting power and mortality of rulers:

I met a traveller from an antique land
Who said: Two vast and trunkless legs of stone
Stand in the desert. Near them, on the sand,
Half sunk, a shattered visage lies, whose frown,
And wrinkled lip, and sneer of cold command,
Tell that its sculptor well those passions read
Which yet survive, stamped on these lifeless things,
The hand that mocked them and the heart that fed:

And on the pedestal these words appear:
‘My name is Ozymandias, king of kings:
Look on my works, ye Mighty, and despair!’
Nothing beside remains. Round the decay
Of that colossal wreck, boundless and bare
The lone and level sands stretch far away.