In the Mexican village of La Patrona, near Amatlan de Los Reyes in the state of Veracruz, a group of women is helping migrants from Central America who are trying the long and perilous journey to the United States on board freight trains.

Their mission serves those making the perilous journey on "La Bestia"

According to the United States Customs and Border Protection, the number of migrants crossing into the U.S. from Mexico is down sharply, a development thought to be an effect of President Donald J. Trump’s crackdown on illegal border crossings and unauthorized stays in the country. Illegal border crossings into the American Southwest decreased by 40 percent in February, at a time of year when they normally spike 10 to 20 percent.

Many of those who have come to this point, however, have risked their lives in a variety of ways. And one of the biggest risks is the mode of transportation they take: a network of freight trains that have come to be known collectively as La Bestia—the Beast.

For the stealthy human cargo, riding La Bestia is not simply a matter of hopping into an empty boxcar, hobo-style. The train, also known as el tren de muerte—the train of death—has been controlled by armed gangs that demand fees to board. Migrants are subject to maltreatment, as well as being pushed off the train while it is moving, from the top of a tanker car, for example. Some migrants have been known to fall off, if they fall asleep or faint for lack of nutrition on the long journey.

A series of migrant refuge and assistance stations has sprung up over the years, however, and one, in the southern state of Veracruz, has been serving meals and hospitality for 22 years now. French photojournalist Mahé Elipe visited Las Patronas and documented its work in this series of photos. 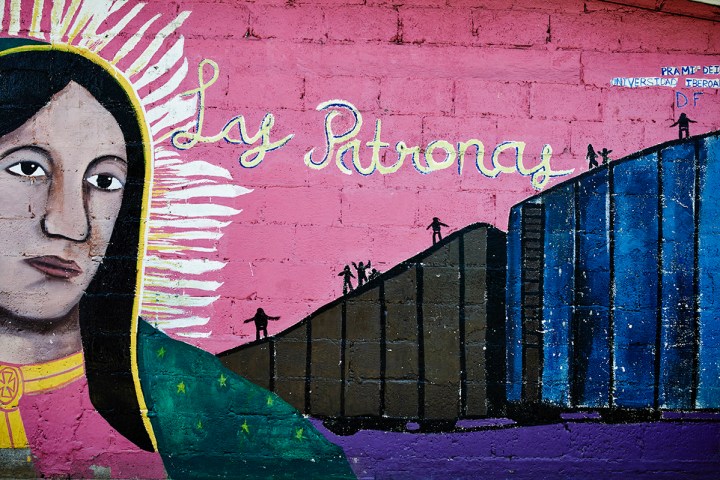 Las Patronas is the feminine form of “the bosses” in Spanish, and the women who work here are masters of efficiency. But they are also “patrons” of those in need. Norma Romero, who started the mission with her sisters, daughters and neighbors in 1995, did so after seeing the train one day and noticing a man who “didn’t have water or food, for something like one month,” Elipe said. “It’s a really hard condition, and one of them was really bad and sick, and he was asking her for something. So at the beginning she just took vegetables from her garden.”

The group grew and converted an old factory into a hostel and kitchen. Mothers and grandmothers, ranging in age from 28 through their 70s, “dedicate their lives” to the effort, Elipe said. Though only two of las patronas drive, a daily run to a generous supermarket gives the women the raw materials they need for the day: rice, beans, tortillas, bread, pastries. They cook and prepare individual care packages. They refill used plastic bottles with a precious commodity for someone who will be on the train for days: water.

And then they bring it all to the side of the tracks and wait.

“You never know when the train is coming and how many people you can find on it,” Elipe said. There are normally three a day, but sometimes there’s only one per day, so then there are more people on it.

But when it does come, the train passes quickly, requiring volunteers to run up in such a way so the men can grab the food packages and bottles.

They usually have no more than five minutes for the hand-off.

Aside from providing food and water, Las Patronas, located in the village of La Patrona, near Amatlán de Los Reyes, is a place of rest for anyone who needs to interrupt his journey. Medical doctors might be available to provide checkups or treatments. The hostel has a registry for transients, so migrants’ families back home can get an update on their loved ones.

Of the migrants Elipe had a chance to observe, the Paris-based photographer commented, “They are people like you and me…. but most of them are guys. Some are adolescents. They are not really happy to leave their country. They have all the family and all their history there. They are looking for a better political and economical situation so that’s why they have to move.”

Elipe came away impressed with the work las patronas do, especially compared to the mixed reaction she has seen her fellow countrymen give Middle Eastern refugees in recent years. “When I see something like that where, even when people don’t have a lot of money, the help that they give to people,” she said, “it’s an example of what is humanity, how people can share with one another.”