The miraculous life of Gianna Masciantonio, a little girl kissed by the Pope

It's a miracle that she survived long enough to be born, and now the baby who has defied all the odds is turning 2 years old.

It’s been nearly a year since Pope Francis was in Philadelphia during his historic visit to the United States. Some may remember the moment a baby girl was plucked from the crowd on the street and delivered to Pope Francis, who kissed her on the top of the head and blessed her with the sign of the cross. This unscripted and instantly iconic image splashed across headlines and soon came to be known as “The Miracle on Market Street.” Little did we know this wasn’t the first miracle in the life of Gianna Grace Masciantonio—the first was the fact that she was even alive.

Up until that point, Gianna had been battling for her life for nearly a year. Just four weeks after birth, Gianna was found to have a massive brain stem tumor, a condition so serious that her parents, Kristen and Joey Masciantonio, were told by doctors that it was extraordinary that she even survived the pregnancy. That news was shocking, especially because by all outward appearances, Gianna was a healthy little girl with hearing loss. Later, doctors discovered Gianna’s condition wasn’t cancer but a blood disorder called Juvenile Xanthogranuloma (JXG). Nevertheless, the prognosis was still dire because the tumor’s location inside the brain stem was attacking her central nervous system instead of being a benign lesion on the skin as JXG commonly manifests.

Not only is Gianna’s condition very critical, it’s so rare that she’s only one of a few confirmed cases in the world. Kristen and Joey’s initial disbelief turned to agony. Kristen recalls the days early into Gianna’s diagnosis when she was often so overwhelmed with fear, she could only pray, falling to sleep every night with a rosary given to her by their son Dominic’s teacher. Well-meaning people from Kristen’s wide circle of friends couldn’t even reach her. In addition to close family, Kristen found her only solace in prayer. Her dearest friends and family met Kristen in her grief by simply offering to pray the Rosary with her. Nothing more. No chit chat. Just staying with Kristen in the moment.

As the days stretched into months, Gianna continued to confound the experts, who had told Kristen and Joey when Gianna was four weeks old to put her into hospice care and plan her funeral. They did. But they also kept hope alive because Gianna continued to give them every reason to keep going: the doctors said her movement would always be very limited, yet she began to wiggle, crawl, and pull herself up. They said she wouldn’t be able to feed herself, but now she can. They said she wouldn’t be able to hear, but after three months of chemotherapy, she started typical baby babble and now can call her parents, brother, and other relatives by name. She also knows how to ask for more ice cream. 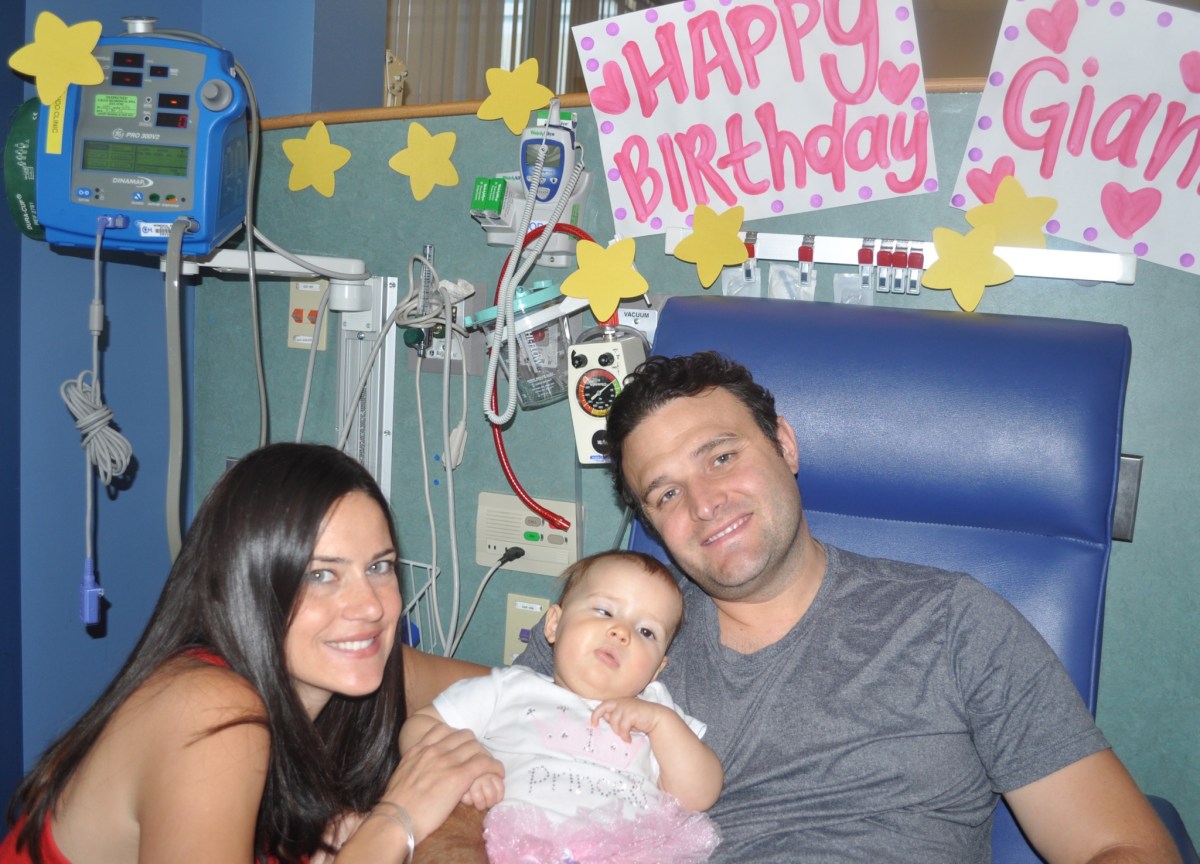 birthday video
, an annual tradition she had started when Dominic was a baby. Several minutes of photos, backed with music, show Gianna at birth and through every stage of hospital treatment and family events. In the photos, Gianna often has one of her tiny fists pumped into the air, Rocky Balboa-style. But with every fighting moment there was always the potential for the worst to happen. Gianna’s tumor had only responded minimally to treatment. Joey grimaces as he reflects on the combination of anticipation and fear every morning when they would go to her bassinet, not knowing if she would be alive. “It was really bad,” he said simply.

Going to see the pope

Now, incredibly, Gianna is turning two and Kristen is getting ready to create another birthday video. Reflecting on the past year since Pope Francis’ blessing, Kristen and Joey have a mixture of laughter and awe when they think about the encounter. Joey remembers how adamant Kristen was about getting to the city in the hope of just glimpsing the pope as he motored by. Just as adamant, Joey pleaded to skip the Stateside popemania and fly to Rome for a hopefully more civilized encounter in Saint Peter’s Square. “I would have flown them to Antarctica if it meant skipping Philly,” Joey laughs.

At last, the day of the pope’s procession arrived and Kristen and Joey were still undecided. By mid-morning, thousands of people had already started lining the streets along the path that Pope Francis and his popemobile were scheduled to take. There were few available routes into the city from the Masciantonio’s suburban Philly home and many streets were completely blocked. Parking the car could be impossible and they may need to walk for miles, fighting through crowds—all of this with a critically ill baby and 4-year-old son in tow. If ever a voyage seemed impossible, this was it. But then, a close friend called with a surprise offer from a friend in the FBI who was working that day in Philly. He offered to position them as close as possible to the street procession where they could at least see the pope.

As a final precaution—and almost hoping for a “no”—Joey called Gianna’s doctor, expecting him to strongly oppose taking Gianna through the crowds. Instead, Joey recalls, the doctor said, “Go for it!” They loaded everyone into the car and hit the road, which was strangely quiet, especially considering all the media forewarnings. The trip into Center City, which on a normal day can take over an hour, was 38 minutes and they pulled up near the barricades and promptly found a parking spot on the street. Some things are just meant to be.

Did the world witness a true miracle?

With Dominic on Joey’s shoulders and Gianna in a pouch on Kristen’s chest, Joey and Kristen walked quickly for a mile to get to their meeting point with their new FBI friend. Their trip was so swift, there was even a moment to have a photo with the popemobile—sans pope—before it set off on its journey with the pontiff. Later, as they got into position along the street, Kristen and Joey mingled with the people around them, who were mostly FBI agents, federal marshals, homeland security, and police officers. As the popemobile rounded the corner near them, everyone around Kristen and Joey shouted “Papa! Papa! Papa!” to get attention for Gianna. Joey then raised Gianna up high and Kristen clutched a piece of paper on which she had written a message to the pope asking him to pray for Gianna. Suddenly, the popemobile stopped and Pope Francis gazed directly into Joey’s eyes. “He actually smirked!”

Two months after the pope’s kiss, Gianna’s quarterly MRI results were astonishing. The tumor had shrunk to almost nothing and there was only faint signs of the surrounding cysts that had persisted throughout previous treatments. Kristen, Joey, and their doctors were elated. “We had watched Gianna die her first year of life, but now she’s come to life,” said Kristen.

While firm believers in miracles and the power of prayer, don’t bother trying to get Kristen and Joey to say they believe Pope Francis cured Gianna’s tumor. They’ve been disappointed by some media reports saying they’ve proclaimed such. They believe Pope Francis to be a sanctified messenger. “Gianna’s life is a miracle,” said Kristen. “Pope Francis kissing her is God’s way of showing He has been with us through this journey and is listening to our prayers.”

Every day, a new test of faith

Up until this time, Gianna has endured 10 hours of brain surgery, 15 months of chemotherapy, 7 shunt surgeries, and a port surgery. In addition, after a chemotherapy treatment, Gianna is usually hospitalized the following week for fevers and low blood counts. Living so many long stretches at Children’s Hospital of Philadelphia (CHOP), Kristen and Joey have been relieved and comforted by the constant circuit of close family members who come from Pittsburgh to stay at their home with Dominic. “Our family has never left us alone,” said Kristen. However, even with this tender care, some periods of time have been anguishing, especially when Kristen couldn’t physically see Dominic for three months while she was breastfeeding Gianna during chemotherapy. It’s not a complaint when they mention it; it’s just a painful truth that is part of the terrain one travels in these situations. 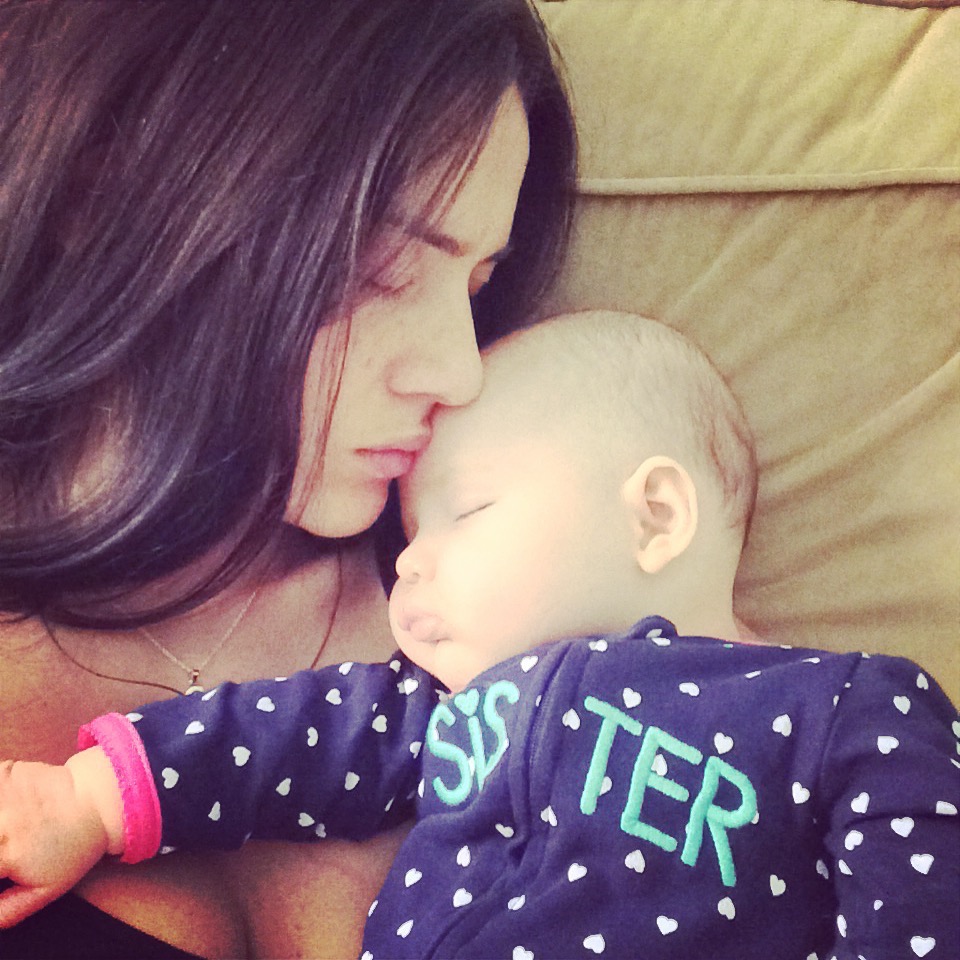 While her family and friends at home have played an irreplaceable role, Kristen’s bond with other mothers at CHOP has also helped to lift her spirit. Sometimes there are happy endings for children and their families and other times there are tragedies—often by death, financial devastation, sibling trauma, and/or divorce. An outsider may consider the Masciantonios’ situation sad, but what Kristen and Joey focus on are the blessings. Every day with Gianna and Dominic together is a miracle. They’ve even launched a charitable foundation, For the Love of Grace, to help families who are challenged with the severe illness of a child. They also plan to help fund research for “orphan diseases” like Gianna’s that are so rare there is little to no research on them.

Although there have been many reasons for cautious celebration, Gianna still has a very long road ahead of her. Kristen says she and Joey have decided to continue to take life “hour by hour, day by day, month by month. It’s not always easy taking things a day at a time. The fear becomes paralyzing at times. That’s when we pray and try to surrender to God.” In the meantime, there’s an eye surgery scheduled for Gianna, Joey and Dom are heading out the door for a special tour of a nearby U.S. Air Force base, and Kristen has a second birthday video to produce.

*Jesus, take the wheel. Why did Gianna get sick? What is going to happen today … tomorrow … and the next? What should we do? Kristen and Joey have found immense comfort in the “Surrender Novena,” by Father Dolindo Ruotolo. It was shared with them by their priest and has carried them through some of the rawest moments when unfathomable questions can overwhelm.

In addition, the Rosary group formed by Kristen’s friends and family, continues to be a can’t-miss conference call every Tuesday night. The circle of participants has grown, and the prayer intentions include not only Gianna but other children in need. One thing that hasn’t changed is their devotion to the Rosary of the Seven Sorrows of Mary, which Kristen was drawn to immediately after Gianna’s illness was revealed.