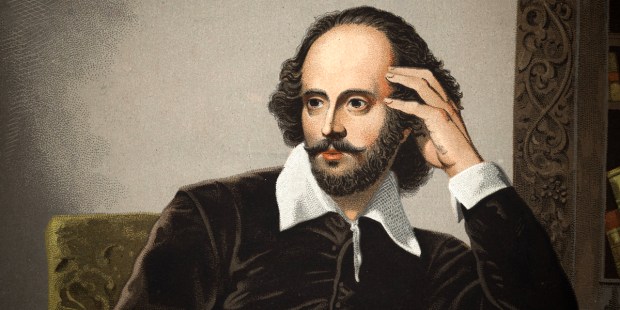 Shakespeare’s characters are like you and me: great and little, honorable and shameful, saintly and sinful

Corpulent, swaggering and entitled. He sauntered into the presence of his new king and old friend, Henry V. And he smiled.

God save thy grace, King Hal, my Royal Hal!

Falstaff couldn’t have been more pleased. His life of sloth and gluttony had now been gloriously secured. For the new king standing before him was once Prince Hal, a comrade-in-high-jinks who Falstaff could count on to drink, carouse and thieve with him. Once again, he thundered with pomposity.

God save thee, my sweet boy!

But he was stopped short. The Lord Chief Justice, standing at King Henry V’s side, leveled his gaze at Falstaff and erupted.

Have you your wits? Know you what ‘tis you speak?

On his heels, Falstaff returned,

My king, by Jove, I speak to thee, my heart!

And then the King declared,

I know thee not, old man…
Presume not that I am the thing I was,
For God doth know, so shall the world perceive,
That I have turned away from my former self;
So will I those that kept me company.
When thou dost hear I am as I have been,
Approach me, and thou shalt be as thou wast,
The tutor and the feeder of my riots.
Till then I banish thee, on pain of death,
As I have done the rest of my misleaders…

King Henry V, a disappointment as a son and prince to his father Henry IV, had reformed. For his wayward ways, he received a harsh scolding, apologized to his father and promised to start anew. And, ultimately, he would go on to rally the outnumbered English with his famous St. Crispin’s Day speech and lead them to victory over the French at the immortalized Battle of Agincourt. Yes, he would become a hero. But Henry V would also, unceremoniously and disdainfully, dismiss his old friends.

Now, my first reaction to this (beyond surprise) was to rationalize on behalf of the king. Henry V was a hero who had changed his ways, made amends, rehabilitated…surely his harsh banishment of his old friend was justified, right? He was a better man and thus, would have better motives and better actions in all that he did, right?

My good friend familiar with Shakespeare’s play was unconvinced.

Yes, yes, Henry V was reformed. But with respect to Falstaff, he was still being a jerk.

I had to think about that for a while. And soon I realized… my friend was absolutely right. That is the genius of William Shakespeare.

The breadth of Shakespeare’s work is extraordinary. He was both prolific and versatile penning tragedies, comedies, histories and sonnets that easily fill hundreds of pages. It is humbling to consider that at the age of 42 (ahem, one year younger than me), he wrote Antony and Cleopatra, Macbeth and King Lear… all in the same year.

But beyond Shakespeare’s enviable productivity, it is his keen insight into human nature that gains him the oft-given title of Greatest Writer of All Time. To fully grapple with the identity crisis found in the aged, we only need to follow the dark descent of King Lear into the storm. To consider the burden of insincerely confessed sin, we can simply kneel with Hamlet’s uncle Claudius in the privacy of his chapel. To consider the conniving craftiness of false friends, we must only accompany Iago in his plot against Othello and Cassio. And to sense the despair of lost love, we can gently place the kiss with Romeo against Juliet’s presumed dead lips.

Read more: How to get your kids to love Shakespeare

Shakespeare’s characters are not binary — good or evil — but instead carry shades of both in ever-shifting proportions. The heroes have vices and the villains have virtues. Othello is honorable, but vindictive. Hamlet is devoted, but sullen. Falstaff is conniving, but lovable. Iago is malevolent, but brilliant. And the Shakespeare’s Fools are ridiculous, but wise.

G.K. Chesterton recognized that what made Shakespeare’s characters so complex and so crystalline was that they were like you and me. Great and little. Honorable and shameful. Saintly and sinful. All at the same time. Chesterton said,

It is the business of art to seize these nameless points of greatness and littleness: the truth… is that art has to single out sins that are not to be found in any decalogue and virtues that cannot be named in any allegory.

And as we are drinking in these rich, colorful and complex characters, Shakespeare is reminding us about ourselves – our rich, colorful and complex selves. We are not binary. We are dignified and fallible, Peter and Judas, shades shifting now to greater light, then to greater darkness. Sometimes we are King Henry V inspiring with his St. Crispin Day speech (“we few, we happy few, we band of brothers”), and at other times we are callously banishing a friend we have recently outgrown. In our virtuous moments, we do well to remember our vices. In wrestling with our vice, we do well to recall our virtue.

Aleksandr Solzhenitsyn, a Soviet dissident and Gulag survivor, understood well what William Shakespeare captured in each of his characters.

Gradually it was disclosed to me that the line separating good and evil passes not through states, nor between classes, nor between political parties either — but right through every human heart — and through all human hearts. This line shifts. Inside us, it oscillates with the years. And even within hearts overwhelmed by evil, one small bridgehead of good is retained. And even in the best of all hearts, there remains … an unuprooted small corner of evil.

So, there you have it.

Shakespeare’s Henry V was a hero and a jerk.

Isn’t that something. That sounds kind of like me.