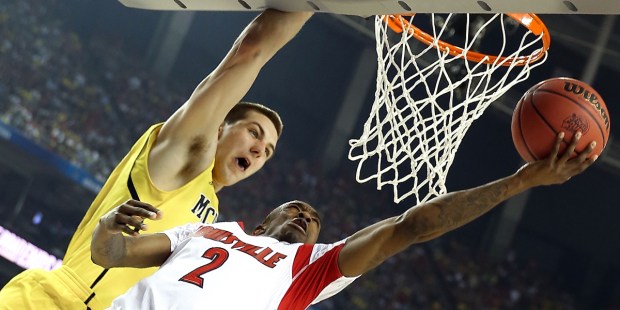 One-sixth of the teams in this year’s men’s basketball bracket are Catholic, and it’s a chance to do some stealth evangelization

While Americans fill out their brackets, choosing winners for fun or (ahem) friendly wagering profit, and glue their eyes to nonstop TV coverage at home, in bars, or streaming online, a bit of stealth evangelization is accomplished. Each tournament institution produces a TV spot promoting its school’s history, mission, and academic excellence. The spots are aired any time a team is playing, giving millions of viewers a glimpse of our country’s legacy of Catholic education. One of this year’s entries is even named for Mother Elizabeth Seton, the pioneer of Catholic education in the United States.

The tournament’s traditional field of 64 was enlarged several years ago to include 8 additional teams who play a First Four round of play-in games on Tuesday and Wednesday. It’s a one-and-done elimination tournament, so losers will be disappearing quickly. If teams advance by winning, you’ll see their on-air promotions more than once.

Here are this year’s Catholic schools to watch and root for (if you’re so inclined) in what’s known as “the Big Dance.” We’ve listed information on the religious orders and dioceses associated with the schools, and included links to each school’s website.

Mount St. Mary’s University, Emmitsburg, Maryland. Named for Our Lady. The Mountaineers are seeded #16 in the East Region First Four play-in round. With roots in the country’s second-oldest diocesan seminary, Mount St. Mary’s was home to Mother Seton while she planned her educational ministry.

Providence College, Providence, Rhode Island. The Friars are seeded #11 in the East Region First Four play-in round. Providence is a Catholic college in the Dominican tradition.

Villanova University, Villanova, Pennsylvania. Named for St. Thomas of Villanova, a Spanish Augustinian. The Wildcats are seeded #1 in the East Region and will play their First Round game on Thursday, March 16. ‘Nova, one of two top-seeded Catholic institutions in the tourney, is a university in the Augustinian tradition.

Marquette University, Milwaukee, Wisconsin. Named for the 17th-century Jesuit missionary and explorer Jacques Marquette. The Golden Eagles are seeded #10 in the East Region and will play their first game on March 17. Marquette is a Jesuit institution.

Gonzaga University, Spokane, Washington. Named for St. Aloysius Gonzaga, the Jesuit patron of students. The Bulldogs are seeded #1 in the West Region. The team, also known as the ‘Zags, represents the only top-seeded Catholic institution in the tournament. Gonzaga is a Jesuit institution.

University of Notre Dame, Notre Dame (South Bend), Indiana. Named (in French) for Our Lady. The Fighting Irish are seeded #5 in the West Region and play their first game on March 16 Congregation of Holy Cross.

Xavier University, Cincinnati, Ohio. Named for St. Francis Xavier, the Jesuit patron of missionaries. The Musketeers are seeded #11 in the West Region. Xavier is one of four Jesuit institutions represented in the tournament.

St. Mary’s College, Moraga, California. Named for Our Lady. The Gaels are seeded #7 in the West Region. With a storied basketball history, St. Mary’s is a La Salette institution founded by the Christian Brothers.

Creighton University, Omaha, Nebraska. Named by the founding donor, Mary Lucretia Creighton, in honor of her late husband. The Blue Jays are seeded #6 in the Midwest Region. Creighton is the fourth Jesuit institution represented in the tournament.

Iona College, New Rochelle, New York. Named for the holy island off the west coast of Scotland, home of the monastery of St. Columba. The Gaels are seeded #14 in the Midwest Region. Like St. Mary’s (Moraga), Iona is a Christian Brothers institution.

Seton Hall University, West Orange, New Jersey. Named for St. Elizabeth Ann Bayley Seton, patron of Catholic schools, by the school’s founder, her nephew Bishop James Roosevelt Bayley. The Pirates are seeded #9 in the South Region. Seton Hall is one of the oldest Catholic diocesan institutions in the United States.

University of Dayton, Dayton, Ohio. The Flyers are seeded #7 in the South Region. Dayton, home to the Marian Library of resources, is an institution of the Society of Mary (Marianists).