Popemobiles: A history in pictures

Away with the carriage — in with the auto. In 1931 the Vatican revolutionized its transportation system. With the “Roman Question” on the sovereignty between the Holy See and Italy settled, automakers were competing to donate their cars to the pope. Circumstances could not have been more favorable, as the pope at the time was Pius XI, who had a real passion for engines. In reality, already in 1909 a car had been presented to Pius X, but the gift was refused and the pope, who had no sympathy for noisy motor vehicles, continued to travel about by carriage. The entry of the first automobile into the Vatican occurred at the beginning of the pontificate of Pius XI. It was a gift from the Association of Catholic Women of the Archdiocese of Milan. Yet the world would have to wait for the signing of the Lateran Pact (1929) until the Roman pontiff would travel by car.

Everyone in…the carriage. The sedan chairs, carriages and cars that have served the popes over the course of history are kept in the Carriage Pavilion, inside the Vatican Museums. The core of the collection is the magnificent Grand Gala Berlin, built in Rome in 1826. Flanking it are nine ceremonial Berlins (a type of two-seater carriage) used by popes, a true motorcade. Also worthy of note is the only example of the Papal Landau, a “convertible” carriage. It was in this carriage that Leo XIII was immortalized in the , a project produced by the Lumière Brothers. Two historic traveling Berlins are also displayed in the collection, one used by Pius IX for his re-entry from exile after the revolutionary movements of the Roman Republic, the other for the final journey of the “Pope King” in the papal lands of Romagna. The carriages (including the bridles and harnesses for the horses) are a rare testimony to papal mobility before 1870. To see further advancements, we have to wait for the Lateran Pact — and the automobile.

Cars that made history. The Graham Paige 837 arrived at the Vatican on November 10, 1929. This marked an important page in papal history: on December 22, 1929 Pius XI was the first pope to leave the Vatican — in this car — since the fall of Rome on September 20, 1870. Years later, in 1943, the Graham Paige witnessed the bombing of the Roman district of San Lorenzo. The years around the 30s were lively. The Citroën Lictoria C6 became part of the Vatican fleet — by far the most elegant — with its deep burgundy color and gilded chrome finishings lending a solemn appearance. Finally, it’s the Mercedes’ turn. It seems that Pius XI was completely smitten by the Mercedes 460 Nürburg limousine — designed by a certain Ferdinand Porsche — and that during the test drive in the Vatican Gardens, the pope exclaimed: “Beautiful car! A masterpiece … A marvel of modern technology.” Then in 1966 came the Mercedes-Benz 300 SEL limousine. Although it was rarely used, John Paul II chose it from the start as his main car, despite the fact that it had no air conditioning, and he never wished to trade it in.

The Popemobiles. Immediately after the Jubilee of 1976 comes the first real “popemobile,” the white off-road vehicle used by the pope for brief journeys and in order to be seen by crowds. The first “popemobile” was a Toyota Land Cruiser, followed by a Fiat Campagnola, sadly associated with the assassination attempt against Pope John Paul II in St. Peter’s Square on May 13, 1981. Since then, the popemobiles (and all papal cars) are armored. These include the Land Rover Santana and Mercedes Benz 230 GE, which remained in service until 2002.

Rare cars. The collection of papal carriages and cars also includes two small cars: a blue Volkswagen Beetle and a white Renault 4. The first — donated to John Paul II — was the last Beetle of a limited series produced by Volkswagen in Mexico. The Renault 4 was donated to Pope Francis by a priest, who served in a parish for many years on the outskirts of Verona — an economy car symbolically donated to the pope who made the peripheries one of the main themes of his pontificate. 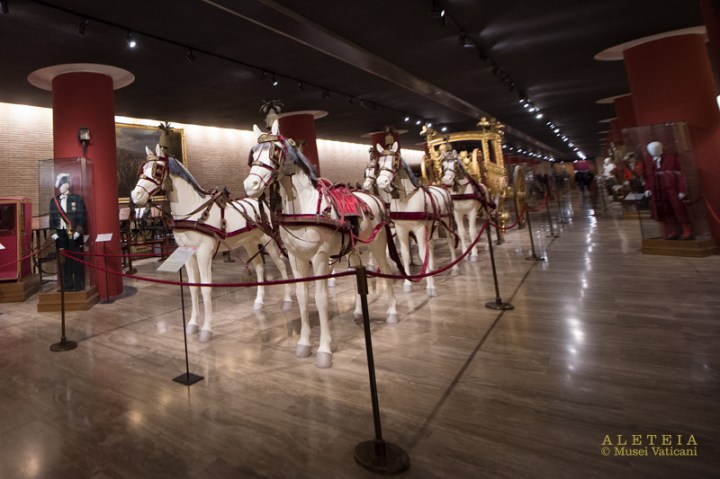