Here’s your spot on a New York sidewalk, to celebrate St. Patrick 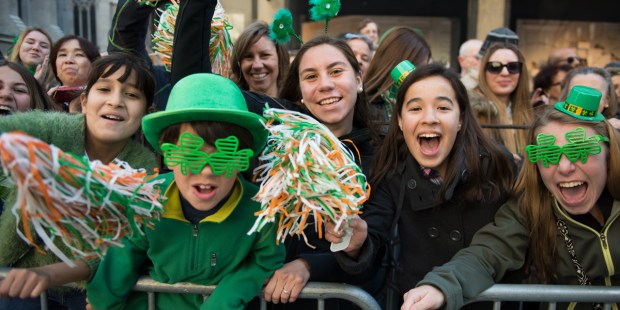 If you needed to be reminded, it’s St. Patrick’s Day. Yes, March 17, the date according to tradition when St. Patrick of Ireland died, though in midtown Manhattan and many other cities around America, the streets are full of life and revelry.

[VIEW THE GALLERY OF THE 2017 ST PATRICK’S DAY PARADE-ONLINE NOW!]

Though it’s not a public holiday, as it is in Ireland, it might as well be for many in New York, where the Irish community has toasted the day since before American Independence.

And for the 256th time, Irish associations are taking part in the annual St. Patrick’s Day Parade. Kicking off this morning at 11, nearly 400 units will march straight up Fifth Avenue, from 44th Street to 79th Street, past St. Patrick’s Cathedral, Central Park and, yes, even Trump Tower, in spite of continuing heavy security there since the election of Donald J. Trump as president.

It’s a day of wearing green clothing and perhaps indulging in a bit of corned beef and cabbage. And maybe imbibing a pint of your favorite stout.

As some have said, it’s a day when everyone in New York is Irish. But that feeling of inclusion hasn’t always prevailed. When this year’s grand marshal, healthcare industry executive Michael Dowling, told a dinner gathering earlier this month that the United States is and always will be a nation of immigrants, the reference seemed to allude to today’s immigration debate. But a century and a half ago, it was the Irish themselves who were excluded and discriminated against.

In 1853, members of the nativist Know-Nothing Party attacked Irish marchers in the city’s Fourth of July parade; in 1854, because of fears of another attack, the police protected the St. Patrick’s paraders.

But as Irish immigrants have woven the fabric of this nation since colonial days, March 17 has become almost as important as any other national holiday. According to John Daniel Crimmins’ book St. Patrick’s Day: its celebration in New York and other American places, 1737-1845, one of the earliest records of a parade in New York on March 17 was in 1762—held by Irish soldiers serving in the British army. Four years later, a local newspaper reported that St. Patrick’s Day was ushered in “with drums and fifes,” which certainly sounds like a parade.

In 1779, there is a notice in another paper of Lord Rawdon’s “Volunteers of Ireland” planning to parade into New York City from Jamaica, Long Island.

When the Diocese of New York was established in 1802, a cathedral was built—under the patronage of St. Patrick—at the corner of Mott and Prince Streets in what is now known as SoHo. From early on, the March 17 paraders made a point of marching past the cathedral.

[Photo’s from today’s Parade are coming this afternoon. Check back to view the gallery!]

The seat of the Archbishop of New York was moved to Fifth Avenue and 50th Street in 1879, and the parade followed the move uptown. St. Patrick’s Old Cathedral, now a minor basilica, is still a very active parish. On its website, it issued a call for parishioners to march in today’s parade and announced that there will be a “Sober St. Patrick’s Day” celebration afterwards in the parish youth center.

As his predecessors have done, the current archbishop of New York, Cardinal Timothy Dolan, will begin the day with a Mass commemorating the 5th-century saint in the “new” cathedral. At 11 a.m., he will take his place on the sidewalk in front of the cathedral, right across from the towering Rockefeller Center, to review the parade. Millions of spectators line both sides of Fifth Avenue for the nearly 2-mile march.

Tradition is important on a day like this, and one that has persisted since the 1850s is the place of honor given to First Battalion of the 69th Infantry, the “Fighting Sixty-Ninth,” leading the line of march. A brief history on the website of the NYC St. Patrick’s Day Parade explains that for the first few years of its history, the parade was organized by military units:

However, after the War of 1812, Irish fraternal and beneficial societies took over the duties of hosting and sponsoring the event. Around 1851 the “Irish” 69th Regiment began to lead the marchers. Also at that time, the Ancient Order of Hibernians (AOH) became the official sponsor of the Parade as the individual societies merged under a single Grand Marshal. Today the 69th Regiment is still the first group to lead the Parade up 5th Avenue. They are followed by various Irish societies of NYC, the 32 Irish county societies, schools, colleges, Emerald societies and Irish language and nationalist societies. Today, the parade is run under a separate corporation, St. Patrick’s Day Parade, Inc.

Lt. Col. Sean Flynn, a veteran of Iraq and Afghanistan, will mark his last day in command of the “Fighting Sixty-Ninth” by blowing the ceremonial whistle which officially starts the parade.

In 2002, NYC St. Patrick’s Day Parade was dedicated to the “Heroes of 9/11” honoring the police, fire and other rescue workers. At midday the entire Parade stretching one and half miles paused for two minutes. The marchers turned to face south towards the “Twin Towers” as Edward Cardinal Egan said a prayer for the victims of 9/11. It is said that was the first time in history that one could hear a pin drop on Fifth Avenue. That year’s Parade was the largest to date with an estimated 300,000 marchers and three million spectators lining Fifth Avenue. It was also the first time in the Parade’s history that the President of Ireland (Mary McAleese) reviewed the Parade.

The parade should pretty much be over by 5 in the afternoon, and by then, many people will be getting thirsty. It cannot be denied that the Irish have gotten a bad reputation for going overboard with their pints and whiskey. And some New Yorkers have done their share in advancing that reputation. Irish pubs like McSorley’s in the East Village, An Béal Bocht in Riverdale or Rory Dolan’s in Yonkers may be packed this evening. But Christopher Dowd, who teaches Irish literature at the University of New Haven, reminds us that pubs are not meant to be places of excess.

“Pub culture was never about getting drunk,” Dowd told USA Today. “It was about socializing, usually around music or storytelling.”

And let’s not forget to honor the patron saint of Ireland in a way he would most appreciate.