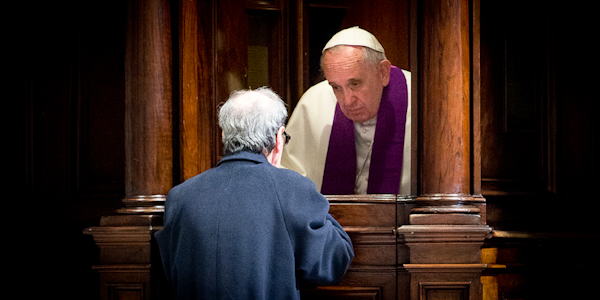 #24hoursfortheLord is becoming an annual tradition. This year’s theme: “I desire mercy.”

VATICAN CITY — Pope Francis is inviting parishes around the world to open their doors for 24 hours next Friday and Saturday, March 24-25, so that the faithful might encounter Jesus Christ anew in the sacrament of Penance and Eucharistic Adoration.

The Lenten initiative, organized by the Pontifical Council for Promoting New Evangelization, is called “24 Hours for the Lord.”

It is a time of reflection and prayer, an opportunity to speak with a priest, and a chance to rediscover — or perhaps discover for the first time — the great mercy, healing, and life-changing power available in the sacrament of confession.

In anticipation of this year’s event, Pope Francis today presided at a penance service in St. Peter’s Basilica.

As in previous years, the pope “taught by example,” going to confession himself, before then seating himself in a confessional to hear the confessions of seven lay faithful, three men and four women.

Dioceses, parishes and communities around the world are invited to adapt the initiative to their local situations and needs.

More information and promotional materials for the event can be downloaded for parish use at www.novaevangelizatio.va. [Choose the English language option at the top right corner of the site]

Next week in Rome, several churches in key locations will remain open for 24 hours, with confessors available as well as Eucharistic Adoration.

On Saturday, March 25, a service of thanksgiving will take place at 5 p.m. in the church of Santo Spirito in Sassia. Monsignor Rino Fisichella, the President of the Pontifical Council for Promoting New Evangelization, will preside over First Vespers of the Fourth Sunday of Lent.

In his 2015 Message for Lent, Pope Francis spoke of the importance of this 24-hour initiative.

“As individuals, we are tempted by indifference,” he wrote. “Flooded with news reports and troubling images of human suffering, we often feel our complete inability to help. What can we do to avoid being caught up in this spiral of distress and powerlessness?

“First, we can pray in communion with the Church on earth and in heaven,” the pope said. “Let us not underestimate the power of so many voices united in prayer!

“The 24 Hours for the Lord initiative, which I hope will be observed . . . throughout the Church, also at the diocesan level, is meant to be a sign of this need for prayer.”

Asked how the faithful around the world can best become involved, the pontifical council’s president said last year that the success of the event depends on how much “we priests are convinced about the good of the initiative.”

This year’s initiative will try to repeat the success of past years in Rome. Well-catechized and committed Catholics, many of whom were young people, stood outside churches and invited passers-by to enter.

Archbishop Fisichella said that the Church of Santa Maria in Trastevere was full of young people coming to confession, even at 2 in the morning.

People around the world can show their support for the initiative by using the #24hoursfortheLord hashtag.