We all know St. Patrick’s Cathedral, but… do you know “Old St. Pat’s”? 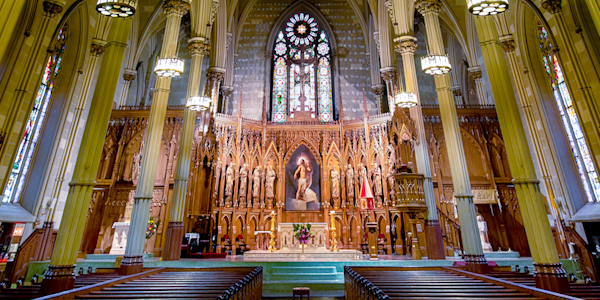 It formally opened on May 4, 1815, more than half a century earlier than the cathedral in midtown Manhattan.

The Basilica of St. Patrick’s Old Cathedral, on the corner of Mott and Prince streets in Nolita (“North Little Italy,” in case you wondered where the name came from), is the original cathedral of the Archdiocese of New York. Built just over 200 years ago, it stands in the heart of old New York as a historical reference for the Catholic faithful and a symbol of religious freedom in America, even though tourists completely pass by it (heading to the “new” St. Patrick’s) and locals don’t always know the story of the church, which is now surrounded by high-end stores and brand new coffee shops.

Back in the day the “Old St. Pat’s,” as is commonly known, was the center of an extremely impoverished Irish community; over the years it has served an increasingly multiethnic flock, welcoming Catholics of every origin. Standing as the church does at the crossroads of Chinatown and Little Italy, it’s only natural that it draws a diverse gathering of the faithful.

When New York was New Amsterdam (way before the Dutch traded Manhattan for Suriname), Peter Stuyvesant, the director-general of the city (and a strict Dutch Reformist Protestant), was openly hostile to public worship by any but his co-religionists. When the British took control of the city in 1664, things did not change much, and the small Catholic population living in what was now called New York were not fully free to worship until until 1674, when King James II (who had adopted the Roman Catholic faith himself) granted religious liberty to the province. Until then, there was not a single Catholic church in the area.

It was a bit later, in 1683, when King James II appointed colonial Governor Thomas Dongan, himself an Irish Catholic, to govern New York. His “Charter of Liberties and Privileges” was adopted by the provincial assembly, legally granting religious freedom to all Christians. But the fall of the Catholic Stuarts in England after the Protestant “Glorious Revolution” of 1688 drove Governor Dongan from his post, and that was the end of religious liberty in the province again, as explained by Joyce Mendelsohn in her article on the Old St. Pat’s website.

Things only got worse: in 1700, the provincial assembly in New York passed a law that explicitly prohibited Catholic priests from entering the city. Nevertheless, Ferdinand Steenmayer, a Jesuit, managed to get into the city more than once to celebrate Mass in secret. Eighty-four years later, the anti-Catholic law was repealed, and Charles Whelan, an Irish Capuchin friar, organized what would become the first Catholic parish.

At that time, New York’s Catholic community numbered fewer than 1,000 people, mainly of French, Spanish, Portuguese, German, and Irish descent. It was the French consul who incorporated the Roman Catholic Church in the City of New York, in 1785. That same year (almost entirely financed by a donation from King Charles III of Spain), St. Peter’s Church, the first Catholic house of worship in the city, was built on Barclay Street,

By the early 19th century, Anthony Kohlmann, the Jesuit in charge of St. Peter’s Church, recognized that the city’s growing Catholic population needed both a second sanctuary and a cathedral for the first bishop. The city had already been made a see in 1808. The site he chose for the new church was being used as a cemetery for St. Peter’s, and was well outside the settled area of the city, surrounded by farmland and the country houses of the rich.

“Old St. Pat’s” was dedicated on May 14th, 1815, the year in which John Connolly, an Irish Dominican friar, arrived to take office as the city’s first bishop.