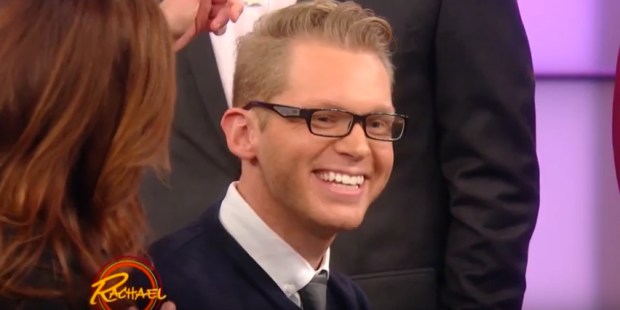 He lost his vision as a teenager, and never expected to see again.

Stargardt’s disease is a rare hereditary disease of the retina that usually manifests itself before age 20. The symptoms consist especially of the reduction of vision, changes in color perception and intolerance to light.

It can even lead to blindness or to low vision. This was the case with Gene Purdie, a Denver man suffering from Stargardt since he was a teenager .

But in spite of his disability, Gene has always remained active. His wife Joy says he always put passion in whatever he did. Especially in the kitchen, where he loved to cook, even though it took quite a bit of effort to read the recipes.

The family had become accustomed to living with the disease, but one day, Joy saw something incredible on television – something  that would change their lives .

In an episode of the Rachael Ray Show, there was a demonstration of an ocular device constructed with HD camera called eSight. The technology would, for the first time, allow those who have suffered vision loss from Starsgard to see normally.

Joy then decided to write a letter to the producers of the show. At the thought that her husband would be able to see his wife’s face and his young son for the first time, she wrote that she “literally began shaking and crying for the next hour or more.”

Accepting Joy’s request, Ray invited Gene and his family to the show. When Gene took off his glasses and put on the device, he was finally able to see his wife and son. For the first time in his life.

Watch his emotional reaction for yourself (minute 4:42).