A woman with a message she cannot contain: Homily for 3rd Sunday of Lent 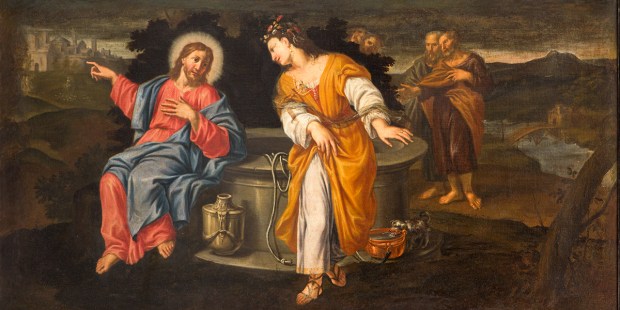 Renata Sedmakova/Shutterstock
St. Photina After encountering Jesus at the well, Photina reformed her life and proclaimed the Gospel to all. She died a martyr at Carthage. Feast Day: March 20. Tradition gives her the name "Photina," or "enlightened one."

You don’t get an email like this every day.

In late February, I received an email from a woman in Michigan. She had stumbled across my blog and she wanted to share something with me.

She told me she was born and raised Catholic, and was educated by Dominicans, but had left the faith when she was young.

She ended up joining the United Church of Christ. Feeling called to something more, she entered the seminary and was ordained a minister, eventually serving as a pastor. She retired a few years ago.

“My life,” she wrote, “has offered some very interesting and at times challenging experiences. At 72 I have arrived at a point which begs for spiritual reexamination and exploration.” She went on to describe how excited she was about Pope Francis—a man she called “such a shining example of leadership and love… providing much-needed light in my life.”

For reasons she couldn’t quite explain, she felt herself drawn back to the faith that had formed her and that had played such an important role early in her life.

You don’t get emails like that every day—especially from people you don’t know. I wrote back and told her I’d be praying for her on her journey, wherever it led. I wasn’t sure that I’d hear back from her. But several days after that exchange, I did. She wrote to tell me that she had gone to Mass on Ash Wednesday. The desire to reconnect with her faith was growing. She had made an appointment to talk with a parish priest.

After decades away from the Catholic Church, she wanted to come home.

I thought of this woman and her journey when I read this weekend’s gospel—a story about another woman’s journey, but a story that is very much one of conversion. Like so many conversions, it is a brought about because of thirst.

It is Jesus who asks for a drink of water. But ironically, it is the woman who is really thirsty.

Isn’t this true for all of us? We are all, in a sense, the woman at the well.

We thirst for love, or mercy, or understanding. We thirst for justice or peace. Our throats are parched by indifference and selfishness and cruelty. We feel ourselves spiritually dry.

And we find it, like the woman at the well, not in ordinary water from a deep cistern, but from Christ.

Among other things, this episode illustrates a recurring theme in the gospels. Put simply: an encounter with Jesus changes everything. We hear it again and again. The blind see. The dead rise. The lame walk. The sinner is forgiven. A woman who just wanted to get some water finds her whole life transformed.

And so, conversion begins. And it is not a one-time event. It is the journey of a lifetime.

Conversion, of course, is part of our own Lenten story. During this time, we are seeking to be something better than we were. Two and a half weeks ago, as a sign of that, we were marked with ashes. We joined Jesus in the desert. We now spend this time looking more closely at who we are, what we have become, what we pray to be.

And, in our desert, we thirst.

But this gospel tells us that whatever we are thirsting for—whatever is lacking in our lives—Christ will provide.  He offers us living water.

This gospel reading, I think, has many layers. Like the well, it goes deep. But there’s one detail that I find especially striking, because it tells us that this incident is not just about a random meeting with a Samaritan woman on a hot day. It’s much more.

This incident is really about the Resurrection.

It foreshadows Easter. It is an encounter with hope.

Easter morning, you’ll recall, Mary Magdalene meets Christ outside the empty tomb and runs to tell others what she has seen.

Here, another woman encounters Christ by a well—and also runs to tell others what she has seen.

The good news cannot be contained. One woman bears witness. And then others. And nothing can stay the same.

Lent is about seeking that encounter, desiring that change. We want to alter the direction of our lives. We thirst for it.

Very often, that means we want to come home.

On Tuesday, I wrote to the minister to see how her meeting went with the parish priest. She wrote back: “I cannot begin to tell you how extraordinary it was.”

She met with the priest after Mass on Sunday. For the first time in decades, she received the Sacrament of Reconciliation.  He heard her confession.  She hopes to receive the Eucharist sometime before Easter.

“Did not go to bed until midnight Sunday evening,” she wrote. “Too wound up. And have been on the move ever since!”

I imagine the woman at the well felt the same way.

Please keep this woman minister in your prayers—and pray, too, for all who are making their way to the Church, especially our candidates and catechumens as they prepare for Easter.

We are all here because we thirst.

May that journey draw all of us closer to Christ.

Because an encounter with Christ changes everything.