Being Catholic matters: How to be ‘all in’ 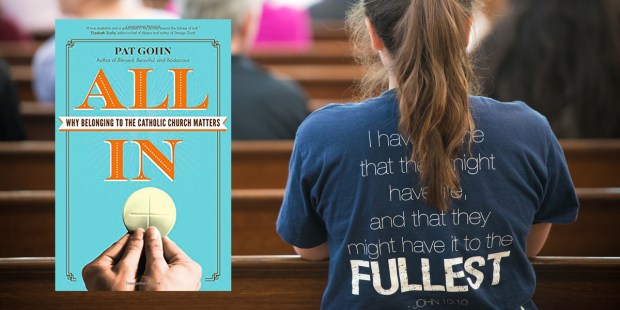 Kathryn Jean Lopez speaks with Pat Gohn on her new book and how important it is to get into a relationship with God.

Want to be a joyful Catholic? Be All In with Catholicism by having a “loving relationship with God,” Pat Gohn writes in her new book, with the subtitle, “Belonging to the Church Matters.”

The Church, she testifies, “strengthens and nurtures my relationship with God. It puts me in touch with the lover of my soul, the Beloved one, Jesus.” She talks more about the book and the claim.

Kathryn Jean Lopez: “I’m often in awe of the saints of the Church – they’ve seen it all – the good, the bad, and the ugly sides of life and the Church through the ages. Their faith never ceases to amaze me. To be a saint is to be all in.” Is that what you’re aiming at with the book? To be a saint and help others to be too?

Pat Gohn: From a Catholic perspective, that would be a fantastic outcome. The Church calls all of us to be saints. But just in case that feels kind of daunting, I like to remember, and I wrote this in the book, that “Jesus Christ is there, standing right beside every earthbound Church member who is sinner, but a loved sinner. We are beggars who know where there is bread.”

Pope Emeritus Benedict once wrote: “The Church is not a communion of those ‘who have no need of a physician’ (Mk 2:17) but a communion of converted sinners who live by the grace of forgiveness and transmit it themselves.”

The saints never quit on the Church. The saints throughout history have seen great times in the Church, but also some of the very worst of times.  If the Church of their day was dealing with sin, as many see our Church today in the wake of scandals and pain … the saints found ways to love like Jesus did, and bring about the reforms that called the Body of Christ to greater holiness.

Lopez: “God came to save and redeem every frailty, every weakness, every sin, and every broken heart,” you write. And “God is real and he loves you, and he invites you to be in his family forever.” Again, how can you be so sure? Did cancer make the difference in believing?

Gohn: Again, I can speak from my own experience. I do share my own stories in this book and some of my struggles. One of them is the life-altering diagnosis of breast cancer when I was 36.

We’ve all got a “worst” thing that may have happened to us that leaves a kind of scar on us, either the kind you can see, or the invisible kind … and yet, even at that time my faith brought me through, as well as an amazing support system of family and friends. That was a time when I faced my own mortality, and had to answer the life and death questions. It was a time that tested me about whether or not I could still believe in the goodness of God, and promises he gave me. Yet God’s graces were present and I believed that whether I lived or died, I was in God’s care.

I wasn’t afraid to die as much as I wanted to live to raise my children. But I had to face that the choice may have been out of my hands. I had to believe that maybe the plan for my life was to be a shorter one.

I think the scars of our lives are places where God longs to heal us, whether it’s a spiritual healing or something else. I’ve experienced a lot of frailty and weakness in myself that God has helped me overcome, or on occasion he has removed it outright, as in a healing.  Or, if it hasn’t been removed, God has given me the grace to live with it.

Lopez: You stake a lot on Jesus as Bridegroom to a Church as Bride. What if that sounds like nonsense to a reader?

Gohn: That is the language the Church uses, and so I like to echo it. It is also an analogy that has meant a lot to me, and I explain it extensively in an early chapter.

We live in a society where marriages have experienced a lot of pitfalls and problems. Divorce rates are high. All the more reason to talk about marriage from a heavenly perspective, with a loving, faithful Bridegroom (Jesus) who will never leave his Bride (the Church.) Rather than being nonsense, it might begin to build a bridge toward healing in a person. However, even if a person cannot relate to this style of language, I hope that they can receive the idea of the remarkable and unbreakable fidelity of the love of Christ. It is described in other ways in the book, too.

Lopez: Why was John Paul II at Madison Square Garden so formative in your life?

Gohn: I was a young adult when John Paul II was elected Pope. I was privileged to hear him speak at Madison Square Garden in New York and he made an immediate connection with all of us in the audience that day. It was also exciting and very inspiring to be around thousands of young people at a faith-related event. This was before there was such a thing as World Youth Days. I’ve often wondered if that MSG event helped to inspire WYDs.

Anyway, I’m a reader, and back then, before the internet, you had to actually order books that were made containing the homilies or encyclicals of popes. You couldn’t just click on the Vatican webpage as we do now! So I began reading John Paul, and again, was very inspired not only by his life, but by his preaching and teaching. I did get to see him in person one last time, in a General Audience in Rome in 2004.

St. John Paul II is a hero of mine.