What is a Saint Joseph’s Table? 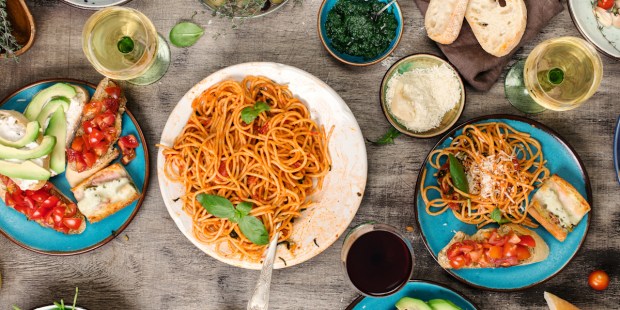 Saint Joseph, even though he doesn’t speak a word in Sacred Scripture, has been deeply loved by Christians since the very beginning of the Church. It did not take long for Saint Joseph, on account of his role as the protector of the Blessed Virgin Mary and the Child Jesus, to become known as the principal patron of the Universal Church and by extension a quiet protector of all Christ’s faithful.

Read more: Did you know the Church has approved some apparitions of St. Joseph?

Since the 15th century his feast day has been celebrated on March 19, a day that typically falls right in the middle of Lent, but that hasn’t stopped the laity from orchestrating a great feast in his honor.

In particular, Italians have had a special love of Saint Joseph, and a famous miracle led the people of Sicily to begin a tradition known as the Tavola di San Giuseppe (Table of Saint Joseph).

According to legend, when a great famine struck the land of Sicily the villagers immediately prayed to their beloved Saint Joseph for protection and relief. They prayed fervently and pledged that if the rain returned they would hold a special feast to honor God and Saint Joseph. Miraculously the rain started to fall and when the fall harvest came, the people of Sicily prepared a wonderful feast in thanksgiving.

The great feast in honor of Saint Joseph then became an annual tradition and was typically celebrated on March 19. Typically the feast would be held in thanksgiving for a particular intention, remembering how God had blessed a family or city during the past year.

Wealthy families would often invite the poor, homeless and sick to take part in the festivities and excess food would be distributed to those in need. Traditions vary by region and city, but generally all activities for the feast center on a table that is covered in different types of food that hold symbolic value.

The table is usually organized to include steps that lead up to a statue of Saint Joseph, symbolizing the ascent to Heaven.

Vigil lights, incense and various plants create an ambiance of heavenly blessing. Since traditionally Catholics were asked to abstain from meat for the entirety of Lent, the foods used to adorn the table are all meatless. Everything is symbolic, reminding the people of different aspects of the faith.

These feasts were often kept within the family home, but different cities would also hold public celebrations for everyone to take part.

In addition to the food, young family members would be selected to play the roles of the Holy Family, angels and twelve apostles. The actors would then participate in a dialogue that brought to mind the search for a place to stay during the Flight to Egypt.

To a soft knock on the door: “No, there is no shelter here.”

Again the knock: “No, there is no shelter here.”

The third knock was answered: “Who is it?”

The reply: “I am St. Joseph. I seek shelter for Mary and Jesus.”

They would enter the house to cries of “Viva Jesu, Maria e Giuseppe.”

Over the years other countries and nationalities have adopted the custom to their region, making the Saint Joseph’s Table a universal tradition. In the end, it is a beautiful activity to honor Saint Joseph and in thanksgiving for the many blessings God has bestowed upon us.