The Indian man who made sanitary pads available to poor women 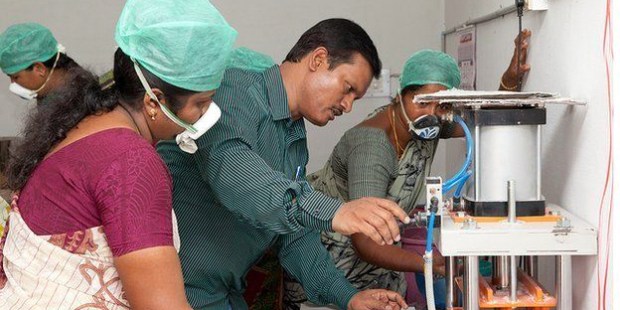 In a country where only 12% of women use pads, he invented a machine so they could make their own.

“It all started with my wife,” Arunachalam Muruganantham told the BBC. In 1998, he was shocked to discover that his wife was using rags (“nasty cloths” he called them) as feminine hygiene. She explained that if she were to purchase sanitary pads, there wouldn’t be enough money to feed the family.

From that point on Muruganantham was a man with a mission. And at great personal cost, he set out to find a way to provide affordable sanitary pads to poor women in India.

The more Muruganantham looked into the issue the more he realized how important his quest was. He learned that in the poor villages near his home in southern India, only one in 10 women used sanitary pads, and only 12 percent used them nationwide.

Women resort to cheaper but unhygienic alternatives such as sand, sawdust, leaves and ash. More worrisome are those who use cloths, but who out of embarrassment, refuse to dry them in the sun, so they don’t get disinfected. Up to 70 percent of reproductive diseases, which are often fatal to the woman, are attributed to poor menstrual hygiene.

Fighting the stigma of sanitary pads

In India, there remains a taboo about menstruation. Women who are having their periods are considered untouchable and can’t enter temples or public places or cook food or handle drinking water, according to the BBC. Many girls drop out of school once they begin to menstruate.

So when Muruganantham began his quest he was ostracized. Villagers questioned whether he was possessed or diseased as he tested his own hand-made sanitary pads on himself (he filled the bladder of a soccer ball with goat blood to test the soaking ability of his pads).

The scandal was too much for his wife and even his mother, who both moved out. Nevertheless, he continued on his search to make an affordable pad.

After testing cotton pads with miserable results, Muruganantham realized that he needed to find out what the ones sold in stores were made of. According to BBC, he spent his last rupee calling manufacturing companies, who couldn’t understand why he would want to know if he didn’t own a plant. In the end, after over two years of trying, found his answer – cellulose from the bark of a tree – by posing as a textile mill owner.

Four and a half years after that, he succeeded in inventing a machine to affordably produce sanitary pads. The machine breaks down the cellulose into fluffy material, packs it into cakes, wraps them in cloth and disinfects them.

Muruganantham then set about making his machines available to women. Most of his clients, the BBC reports are NGOs and women’s self-help groups. In 18 months he built 250 machines which he took to the poorest part of Northern India. Each machine employs 10 people, and produces 200-250 low-cost pads a day.

Happily, since his success, his wife and mother have returned to him, and he has set his sights on the rest of the world.