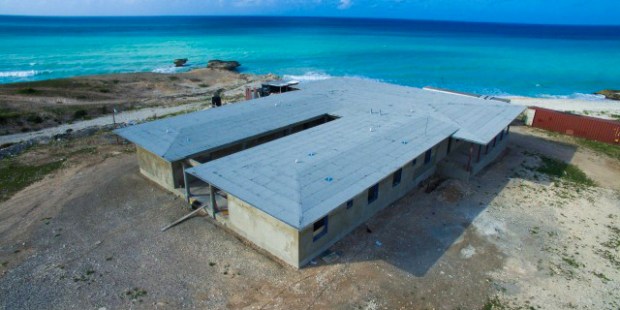 Even before the formal opening of a new hospital in southeast Haiti, it was already treating patients.

During Hurricane Matthew last October, and before the end of construction, the hospital’s main building sheltered 40 residents whose homes had been destroyed. The first patient was seen shortly thereafter.

The New York-based Catholic Medical Mission Board (CMMB) dedicated the Bishop Joseph M. Sullivan Center for Health Monday, bringing a state-of-the-art health center to the town of Côtes-de-Fer. The hospital, named for a retired auxiliary bishop of Brooklyn, New York, is expected to serve more than 50,000 community members. CMMB officials say it will also reflect Pope Francis’s vision of the Church as a “field hospital” and the need for solidarity with the world’s poor.

The facility will be the only hospital in the isolated, impoverished community of Côtes-de-Fer, and will serve people who previously had to travel for hours over rough terrain to reach the closest health center. It will provide the facilities for safe deliveries and surgeries, deliver antenatal, postnatal and pediatric care, and offer pharmacy services and a place to receive emergency care.

The health center was opened in partnership with Mercy Health, a Catholic healthcare system serving Ohio and Kentucky. Mercy Health was the lead funder for the hospital, providing a $2 million challenge grant for its construction.

Over the next 10 years, dental and ophthalmology facilities will be added to the hospital, in addition to a community center and staff housing. The community center will act as a resource for community members and staff to facilitate access to health information, and serve as a training institution for Haitian physicians and nurses.

Groundbreaking for the hospital occurred in February 2015. Last October’s hurricane killed close to 1,000 people and ensured years of struggle for the country, the poorest nation in the Western Hemisphere. People “basically lost everything,” said Christopher Bessey, country representative for Haiti for Catholic Relief Services.

In addition, since the 2010 earthquake, Haiti has been trying to control a cholera epidemic, which has sickened nearly 800,000 people and killed nearly 9,000.

Bishop Joseph M. Sullivan, for whom the hospital is named, served on CMMB’s Board of Directors from 2004-2010 and championed the organization’s response to the 2010 earthquake in Haiti as chairman. He died in 2013, at the age of 83, following an automobile accident in New York.