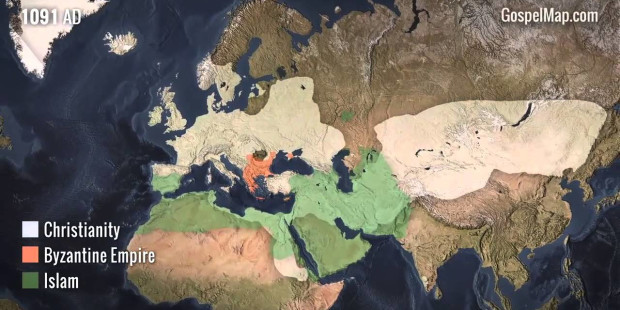 This animated map charts the course of Christianity’s growth around the world, from the Apostles’ time to our own.

This animated cartography, courtesy of the Western Conservatory, is a striking graphic representation of one of the most important movements in the history of mankind: the spread of Christianity.

The animated map not only shows, in chronological order, the nations that adopted Christianity as a national religion, or regions in which Christianity became statistically the religion with the greatest number of adherents, but also the places where enough historical and archaeological evidence was gathered as to affirm that, at some point, there was indeed a Christian presence in the area. That is, the map includes the first journeys of the apostles and the outward-reaching margins of the early Church.

Focusing on Christianity, the map does not show the geographic dispersion of Judaism, Buddhism, Hinduism or other American, African, or Eurasian religions. When Islam has been included on the map, it has been made only to indicate the regions in which Sharia law was instituted, implying a consequent persecution of Christians. For the same reason, the Roman Empire and the Mongolian and Communist expansions and conquests have been included.