How a Christian invented basketball 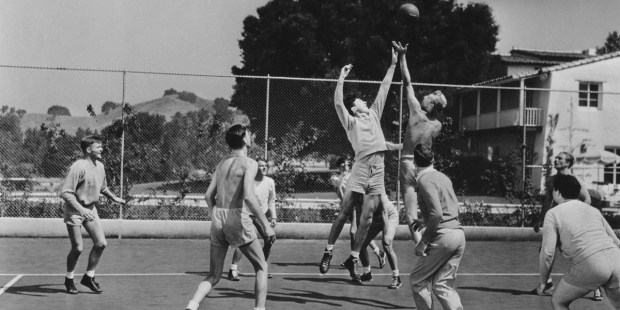 Thanks to James Naismith, many young people were brought to Christ through the game of basketball.

Faced with a group of restless young men snowed in at the International Young Men’s Christian Association (YMCA) Training School in Springfield, Massachusetts, physical education instructor James Naismith had to think of a new game to distract them from the cabin fever they were feeling.

With some added encouragement from his director, Naismith tested his ideas out for two weeks but nothing was working. Then on December 21, 1891 Naismith had a breaththrough.

“Something had to be done. One day I had an idea,” Naismith explained to a New York radio station. “I called the boys to the gym and divided them into two teams of nine and gave them an old soccer ball. I showed them two peach baskets I had nailed at each end of the gym, and I told them the idea was to throw the ball into the other team’s peach basket.” The game was called, “Basket Ball,” and the boys couldn’t get enough of it. They kept asking Naismith to let them play, but with the lack of any rules, brawls would break out on the floor.

Naismith then devised 13 original rules for the game of “Basket Ball” and wrote an article that was distributed to all YMCAs across the country. The game spread like wildfire and by 1898 Naismith was hired as the first men’s basketball coach at the University of Kansas.

Ever since, the game of basketball has been a staple of American culture and has increased in popularity every year, especially at the collegiate level. For example, in 2015 “March Madness” — the annual collegiate basketball tournaments for men and women — attracted 80.7 million people worldwide who watched the men’s tournament online through NCAA March Madness Live.

What’s interesting is that Naismith, while he created the game to entertain restless boys during the cold months of winter, also invented basketball “to win men for the Master through the gym.” This was in keeping with his general mission in life, one that he developed as he studied for a master’s degree from Montreal’s Presbyterian Theological College.

Naismith was convinced that “he could better exemplify the Christian life through sports than in the pulpit” and sought to “develop the whole person—mind, body and spirit” in the gym. As a result, he held basketball players to a high standard and wanted them to be virtuous. Naismith’s director, Luther Gulick, explained the Christian values that surrounded basketball in an article in 1897 where he wrote, “The game must be kept clean. It is a perfect outrage for an institution that stands for Christian work in the community to tolerate not merely ungentlemanly treatment of guests, but slugging and that which violates the elementary principles of morals… Excuse for the rest of the year any player who is not clean in his play.”

Michael Zogry, associate professor in the Department of Religious Studies at the University of Kansas, further explained Naismith’s approach to sports and faith in an interview last year.

“His approach was to put Christianity out there in front of people and try to influence them through positive character development, but he reserved his formal preaching for when he was a guest minister at area churches.”

Basketball for Naismith was not simply a game, but an evangelization tool. In fact, during this time period the YMCAs had integrated the game into their mission trips and it is recorded that many young people were brought to Christ through these missionaries and the game of basketball. This is how basketball was brought to China (through YMCA missionaries), and it has since become one of the country’s most popular sports.

In the end, Naismith firmly believed in the connection of sports and faith and wrote, “Whenever I witness games in a church league, I feel that my vision, almost half a century ago, of the time when the Christian people would recognize the true value of athletics, has become a reality.”