What is the Apostolic Pardon? 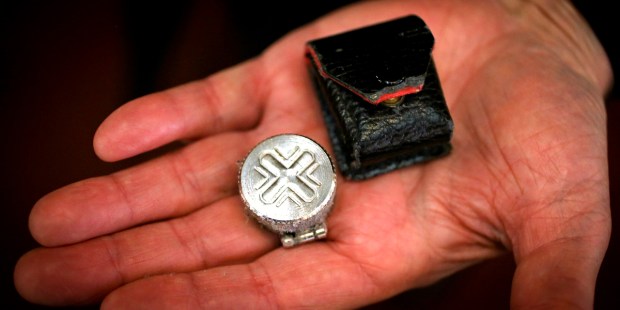 Reserved for those on their deathbed, the Apostolic Pardon is a true gift of grace for the dying.

As a person draws closer to the doors of death, there is one blessing in particular that the Church reserves for this most sacred moment: the Apostolic Pardon. It is a pardon that can be given by any priest and has the special power of removing all temporal punishment due to sin.

Today at Aleteia, you can read the account of one husband’s experience of seeing his wife receive this special grace.

The Catholic Encyclopedia explains exactly what the Apostolic Pardon is and the requirements to perform it.

“The anointing [of the sick] is ordinarily succeeded by the conferring of the Apostolic benediction, or ‘last blessing,’ as it is commonly called. To this blessing a plenary indulgence is attached, to be gained, however, only at the hour of death, i.e. it is given nunc pro tunc. It is conferred in virtue of a special faculty granted to the bishops and by them delegated quite generally to their priests. The conditions requisite for gaining it are the invocation of the Holy Name of Jesus at least mentally, acts of resignation by which the dying person professes his willingness to accept all his sufferings in reparation for his sins and submits himself entirely to the will of God…. The words of St. Augustine are in point: ‘However innocent your life may have been, no Christian ought to venture to die in any other state than that of the penitent.’”

The Apostolic Pardon is typically preceded by the Sacrament of Confession, to the extent that the dying person is able to participate in the sacrament. The priest then prays the “last blessing.”

Through the holy mysteries of our redemption,
may almighty God release you
from all punishments in this life
and in the life to come.
May he open to you the gates of paradise
and welcome you to everlasting joy.
R. Amen.

Read more:
A letter to a dying man

Or as it was traditionally prayed in years past, adding some additional context and noting where this prayer comes from in the Bible:

May our Lord Jesus Christ, who gave to His blessed apostle Peter the power of binding and loosing, mercifully accept your confession and restore your baptismal innocence. And I, by the power given to me by the Holy See, grant you a plenary indulgence and remission of all sins; in the name of the Father, and of the Son, and of the Holy Spirit.

By the sacred mysteries of mankind’s restoration may almighty God remit for you the punishment of the present life and of the life to come, and may He open to you the gates of Paradise and admit you to everlasting happiness.

It is a beautiful prayer and is meant to speed the penitent soul to the gates of Heaven, removing the punishment due to sin that they have already confessed, or at the very least, have fully repented from in their hearts. It does not guarantee someone will go straight to Heaven, but it clears everything off the road, so to speak, so that the soul can freely choose to run toward the arms of Jesus.

The prayer is a supreme act of mercy and has great power, drawing on the authority given to Saint Peter to “bind and loose” (Matthew 16:19). It is a gift to a soul on their deathbed and has the added benefit of giving peace to family and friends, assuring them that they have done all they could do to bring a soul closer to the gates of Paradise.

The Apostolic Pardon is generally given with the Sacrament of the Anointing of the Sick. In part, the Catechism of the Catholic Church says this about the sacrament of Anointing.

# 1511 The Church believes and confesses that among the seven sacraments there is one especially intended to strengthen those who are being tried by illness, the Anointing of the Sick:

This sacred anointing of the sick was instituted by Christ our Lord as a true and proper sacrament of the New Testament. It is alluded to indeed by Mark, but is recommended to the faithful and promulgated by James the apostle and brother of the Lord.

# 1512 From ancient times in the liturgical traditions of both East and West, we have testimonies to the practice of anointings of the sick with blessed oil. Over the centuries the Anointing of the Sick was conferred more and more exclusively on those at the point of death. Because of this it received the name “Extreme Unction.” Notwithstanding this evolution the liturgy has never failed to beg the Lord that the sick person may recover his health if it would be conducive to his salvation.

# 1514 The Anointing of the Sick “is not a sacrament for those only who are at the point of death. Hence, as soon as anyone of the faithful begins to be in danger of death from sickness or old age, the fitting time for him to receive this sacrament has certainly already arrived.”

# 1515 If a sick person who received this anointing recovers his health, he can in the case of another grave illness receive this sacrament again. If during the same illness the person’s condition becomes more serious, the sacrament may be repeated. It is fitting to receive the Anointing of the Sick just prior to a serious operation. The same holds for the elderly whose frailty becomes more pronounced.