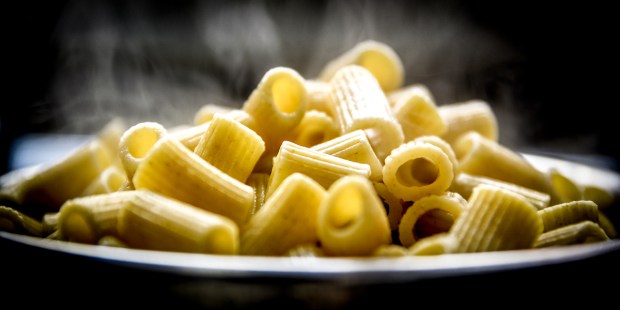 When we think of the food of medieval England we probably think of leg of mutton and other gamey meats. As a matter of fact, thanks mostly likely to Marco Polo’s having brought Asian noodles to Italy and the West, the English (or perhaps only English noble families) also enjoyed a distinctly Italian cuisine — namely pasta.

Among the recipes in the Forme of Cury, a cookbook published in about 1390 by Richard II’s “Chief Master-Cook,” is macaroni and cheese (macrows), that ultimate modern American comfort food.

The recipe, in Middle English, is as follows:

Macrows: Take and make a thynne foyle of dowh. and kerve it on peces, and cast hem on boillyng water & see it wele. take chese and grate it and butter cast bynethen and above as losyns. and serue forth.

Macrows: Take and make a thin foil of dough and carve it in pieces, and cast them on boiling water & seethe it well. Take cheese and grate it and butter, cast beneath and above, as with Loseyns, and serve forth.

And what is “Loseyns,” anyway?

Well, it’s an early form of lasagna. In modern English, The Food of England Project translates:

Loseyns: Take good broth and put in an earthenware pot, take fine white flour and make with it a paste with water, and make from that foils as thin as paper with a roller, dry them hard and seethe them in the broth. Take grated soft cheese and lay it in dishes with spice powder, and lay over it the pasta layers as many and as thick as you wish, and above powder and cheese, and so two or three times, & serve it forth.

Of course it wasn’t all Italian all the time. Richard II and his guests also dined on more typically English fare like “Geese in Hoggepot” (geese cooked in blood) and “Bursews” (fried pork meatballs similar to Scotch eggs) and the more exotic (the book includes recipes for cooking whales, cranes, curlews, herons, seals and porpoises) as befitted a royal household.

More recipes from The Forme of Cury can be found online at Project Gutenberg and helpfully translated at The Foods of England Project.