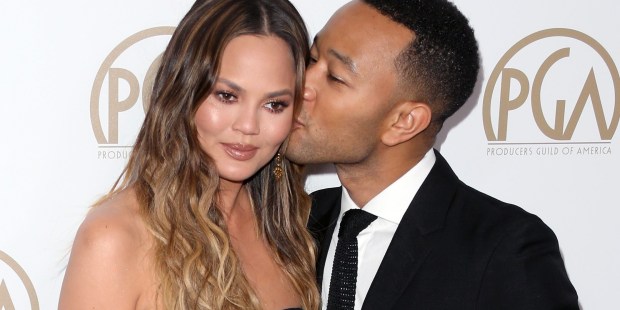 The award-winning singer and songwriter said he is “so proud” of wife Chrissy Teigen for going public with her struggles.

In a response to his wife Chrissy Teigen’s recent essay in Glamour on her battle with postpartum depression, John Legend absolutely nailed the most insidious thing about this very common illness:

“By acknowledging the pain she’s going through, she also acknowledges the pain that a lot of women go through after they have a child. A lot of people don’t want to talk about it. A lot of people feel alone when they’re going through it and for her to let people know that they’re not alone, I think was really powerful.” (Read the rest of John Legend’s comments to a reporter at ENews here.)

Chrissy Teigen isn’t the first celebrity to open up about her struggle with postpartum depression. Hayden Panettiere talked about her postpartum depression in a 2015 interview, and Brooke Shields wrote the actual book on it. Nor is PPD the exclusive territory of celeb moms—two of my favorite Catholic bloggers, Bonnie Engstrom and Jenny Uebbing, have written about recognizing the signs of PPD and how totally alone it makes you feel.

I'll just say it: I have post partum depression. So much love to @glamourmag for letting me share something that was eating me up inside for months and months. One of the most amazing things about social media is the ability to interact candidly with friends and fans and it felt so weird knowing what I was going through but not really feeling like it was the right place to speak on it. I've always felt genuinely close to all of you and I'm insanely relieved you now know something that has been such a huge part of me for so long. My full essay is on the @glamourmag bio. ❤

Let that sink in for a minute. Over half of women with symptoms of postpartum depression remain undiagnosed, and of those who are diagnosed, half are left untreated. Is it any wonder that Chrissy Teigen suffered in silence for nine months, wondering what was wrong with her? For a serious illness that affects the health of “a lot of people,” that’s a lot of us suffering in silence.

Before my last baby was born, I wrote a post about the most essential thing new mothers need. Inspired mostly by my own fierce struggles with PPD, I insisted that women really needed to stay home and rest for several weeks—not just from outside work, but from daily chores as well. But this presupposes that all women will have what I was lucky enough to have this time around—the daily support of my husband and family, and the luxury of a community that recognizes the vulnerability of a mother in those first few weeks and supports her with meals, errands, and help with older children.

Not all new mothers have this luxury, and although efforts to build resources like this are ongoing, we have to deal in reality. And the reality is that even if we can’t provide physical support for postpartum moms, we absolutely can—and should—provide emotional support by talking more about postpartum depression.

The New Jersey Catholic Conference made great strides in 2009 by launching an initiative to educate clergy, religious and lay professionals on the signs and symptoms of postpartum depression. But it’s really up to us mothers who have suffered through it to bring the conversation into the public eye. In every article I’ve linked to, each woman talked about feeling alone, isolated, and alienated by an illness that well over 600,000 US women will suffer from every year. Postpartum depression is one of the most common experiences that binds American mothers together, and the most powerful thing we can do to address it is reach out to each other and start the conversation. Don’t be afraid to share your own struggles with a friend and ask for help, and don’t hesitate to offer help to a new mom who might be overwhelmed. You could be doing more than you know.

For more resources on recognizing the signs and symptoms of postpartum depression in yourself or others and getting help, visit Postpartum Progress.