(Not so) hidden meanings in Annunciation images

From Fra Angelico to Leonardo, the classic Marian motif is more than just an illustration of a Gospel passage.

Unlike some other iconographic motifs in Christian art, the Annunciation scene is narrated in detail in at least one of the Gospels: that of Luke. Even though another, briefer, annunciation scene is found in the Gospel of Matthew –Chapter 1, verses 18 to 25, the annunciation to Joseph — most artists decided to use the Gospel of Luke as the narrative source for their images. This is not only because of the abundance of details contained in Luke’s text but, also because of the rich symbolic and theological implications – Mariological, in particular — that could be addressed in a graphic “translation” of the evangelical text.

Depictions of the Annunciation go back to early Christianity, the earliest one to be found in the Catacombs of Priscilla, dating to the 4th century according to some sources. From those early roots the subject became part of the graphic repertoire of almost every great artist. These artists and their audiences were often quite aware of the deep, rich symbolism contained in the scene, but it’s a visual language with which we today are less familiar. 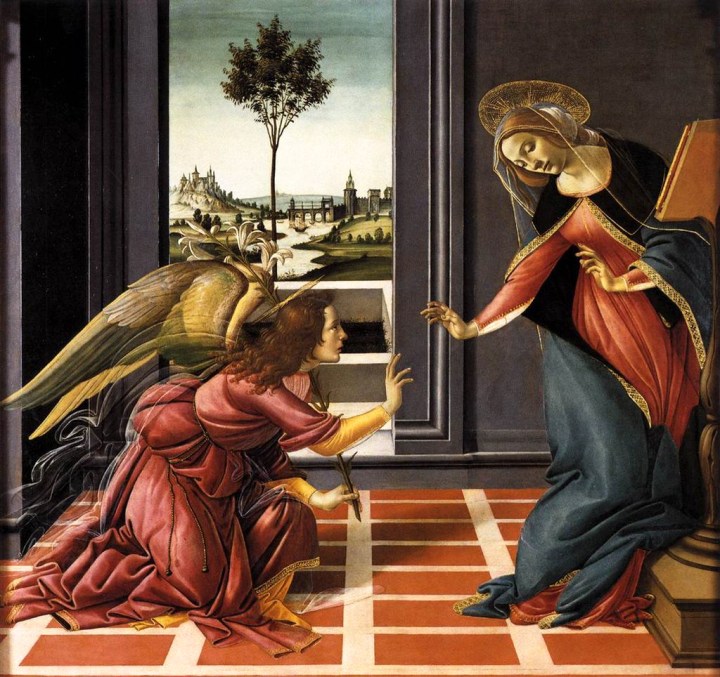 Some Annunciation images, for example, especially medieval images from the 12th and 13th centuries, include “Mary’s Throne,” an elaborate seat in which the Virgin sits to receive the angelic announcement. Featuring rich upholstery and carvings (often the lions’ heads with which King Solomon’s throne was adorned), the inclusion of this anachronistic article of furniture was intended to emphasize Mary’s title as Seat of Wisdom and her authority as Queen of Heaven, Regina Caeli. Although the official Catholic teaching on the Virgin’s Queenship was defined in Pius XII’s encyclical Ad Caeli Reginam, tradition has called Mary “Queen of Heaven” since the 5th century, right after the Council of Ephesus proclaimed Mary the Mother of God.

A dove, which traditionally (based on theaccount of Jesus’ baptism by John) represents the Holy Spirit in Christian art, plays an interesting role in some medieval images of the Annunciation. While the most common depiction shows the dove hovering above Mary (“the spirit of the Most High will overshadow you”), in some depictions the dove flies towards the Virgin’s ear. The reason is to be found in some early texts of the Christian tradition, which relate the virginal conception of Jesus with “listening” to the words of the angel, implying that listening to the Word of God makes the soul fertile. Ephrem the Syrian (“the greatest poet of the Patristic age, the only theologian-poet to rank beside Dante,” Robert Murray would say), proclaimed Doctor of the Church by Pope Benedict XV in 1920, wrote in the early 4th century:

Like the Burning Bush on Horeb (Mount Sinai) which carried God in the heart of the flames, so Mary brought Christ into her virginity: through her ear the Divine Word of the Father entered and dwelt secretly in her womb.

It is not uncommon to find Mary reading a book rather than working at a spindle or some other domestic occupation. According to some sources, this is due to the influence of Franciscan spirituality, which emphasized Mary’s piety. The book Mary is commonly holding is a Psalter, implying she was praying when Gabriel delivered the message. Some artists would go into further detail, not making the book Mary was reading a Psalter but rather the book of Isaiah, in which the prophecy of a virgin conceiving (Isaiah 7:14: “And the Lord himself shall give you a sign. Behold, a virgin shall conceive, and bear a son, and shall call his name Immanuel”) is to be found. Of course there were no books as we know them in Mary’s time; artists used the objects of their own world to convey the message.

Also, most Annunciation scenes occur in enclosed spaces. This is all the more interesting, as it is a reference not only to Mary’s virginity but also to the Song of Solomon. We read, in the Song of Songs:

This enclosed garden (hortus conclusus), needless to say, was understood as a direct reference to Mary’s perpetual virginity and her fertile yet closed-off womb, which was to remain untouched. In order to represent this, most Annunciation scenes include a walled garden as part of their staging. This is all the more noticeable in what might probably be the most famous Annunciation scenes of all, those by Fra Angelico.