The mountain burned with fire unto the midst of heaven 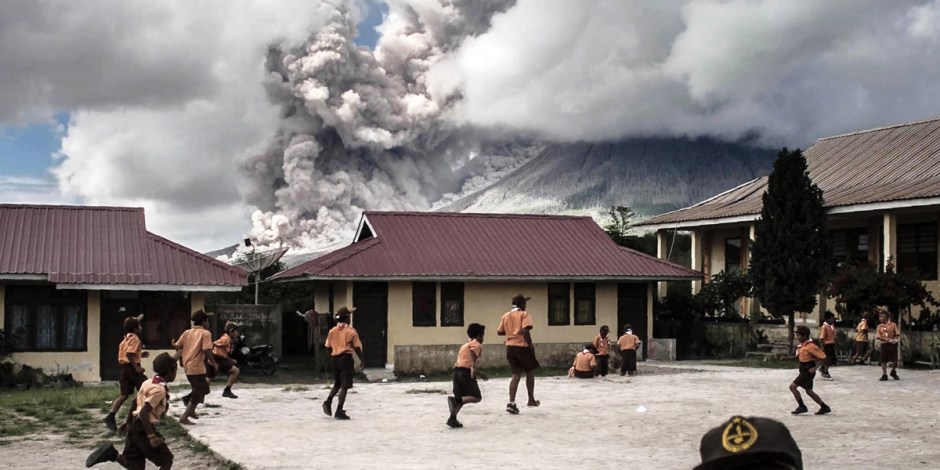 And ye came near and stood under the mountain; and the mountain burned with fire unto the midst of heaven, with darkness, clouds, and thick darkness. – Deuteronomy 4:11

SUMATRA, INDONESIA – FEBRUARY 10, 2017: Elementary school children play outside of their classrooms as Mount Sinabung volcano spews thick volcanic ash, as seen from Karo, North Sumatra province. The scene may look like something out of a sci-fi flick — we might expect aliens or monsters to be descending upon the village at any moment. The children, however, take no notice of the horrifying beauty of nature. They have lived under the threat of Sinabung’s cantankerous regurgitation their whole lives. Nevertheless, many residents in the area have been forced to relocate to other villages of Northern Sumatra at a safer distance from the Mount Sinabung volcano, one of the most active in Indonesia.

Mount Sinabung erupted on May 22, 2016, killing at least 7 people and wounding 2 with large drifting clouds of gas and ash. More than 5,000 people were displaced after this tragedy. Its most recent eruption occurred on November 1, 2016. Sinabung had been dormant for nearly 400 years before a minor eruption marked its reactivation, in 2010.

Since then it has become one of Indonesia’s most active volcanoes, which is quite a feat as Indonesia is located on the “Pacific Ring of Fire,” a region that boasts more than 120 active volcanoes.

Throughout the world there are, on average, about 35 volcanic eruptions a year, and since 1980 approximately 850 people have died in volcano-related incidents.

The reticent volcano keeps
His never slumbering plan —
Confided are his projects pink
To no precarious man.

If nature will not tell the tale
Jehovah told to her
Can human nature not survive
Without a listener?

Admonished by her buckled lips
Let every babbler be
The only secret people keep
Is Immortality.