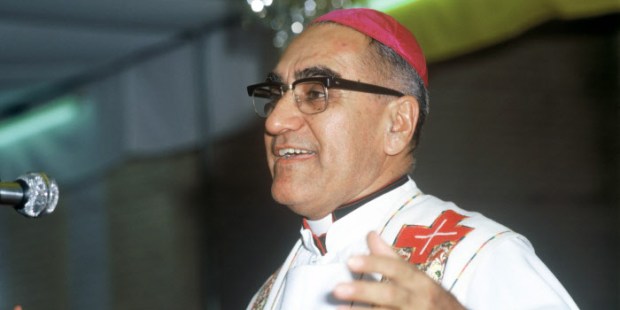 Today is the feast of Oscar Romero, an archbishop killed while celebrating Mass on this day in 1980, in El Salvador.

Pope Francis beatified Romero in 2015 and has often spoken about his example, referring to him as someone “who built peace with the strength of love.”

This week, the bishops of El Salvador had routine meetings with the pope (bishops from around the world meet with the pope approximately every five years).

According to Catholic News Service, Francis encouraged them to make the places associated with Romero into places of pilgrimage.

The Vatican is also studying a possible miracle that could lead to Romero’s canonization as a saint.

The case involves a woman seven months pregnant who was expected to die along with her baby. However, both the mother and child are well today.

+ Born in El Salvador in 1917, Oscar Romero was a carpenter’s apprentice during his youth before entering seminary. He worked in a gold mine to help support his family. He was ordained a priest in Rome in 1942.

+ Romero spent several years serving as a parish priest and working with various apostolic groups, helped introduce Alcoholics Anonymous in El Salvador, and promoting devotion to Our Lady of Peace. He was eventually appointed rector of the seminary in San Salvador.

+ He was appointed auxiliary bishop of San Salvador in 1970 and, in 1974, he became bishop of Santiago de María, a poor, rural diocese.

+ In 1977, Romero was named archbishop of San Salvador. The murder of a priest-friend inspired him to become an advocate for the poor and oppressed in El Salvador. He fought against human rights violations of the Revolutionary Government Junta and he eventually became a target of the government.

+ Archbishop Romero was murdered while celebrating Mass in a hospital chapel on March 24, 1980. Hailed as a martyr and saint, he was beatified by Pope Francis in 2015.

The United Nations General Assembly declared March 24 to be “International Day for the Right to the Truth Concerning Gross Human Rights Violations and for the Dignity of Victims” in honor of the life and witness of Blessed Oscar Romero.

“You have heard in Christ’s Gospel that one must not love oneself so much as to avoid getting involved in the risks of life that history demands of us… whoever out of love for Christ gives themselves to the service of others will live.”—Blessed Oscar Romero

God of power and mercy,
who have granted to Bishop Oscar Romero
to give his life
while celebrating the Eucharist,
in a supreme act of love for you,
grant us, we ask you,
that as you gave him the grace
to imitate Christ’s suffering by his death,
may we, by following in your martyr’s footsteps,
gain eternal life.
Through Christ our Lord. Amen.