Is the EU’s flag really a Marian emblem with the central figure removed? 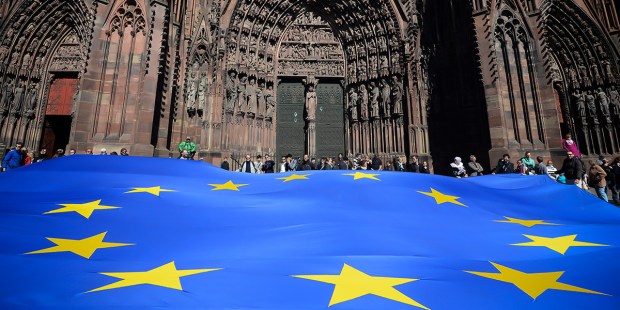 Patrick Hertzog | AFP
Members of the Ecologist Party (EELV) list in the French eastern region hold a giant European flag during a flash mob in front of the cathedral in Strasbourg, eastern France, on April 16, 2014 as part of the campaign for the upcoming European elections. AFP PHOTO / PATRICK HERTZOG / AFP PHOTO / PATRICK HERTZOG
Share
Print
Philip Jenkins - published on 03/25/17

Despite official denials, the truth.

At least in terms of its elites, the European Union has developed a strongly secular identity. European authorities strive to enforce policies that are anathema to the churches, and European courts try to enforce strict public secularism.

The irony of all this is when they issue these decisions, European officials usually stand under a flag that bespeaks a militant Catholic piety, almost a crusading character. The clash between the symbol and the statements is so enormous as to boggle the mind.

The European flag is visually attractive, with twelve gold stars on an azure background. It’s a lovely piece of design. Officially adopted as the EU symbol in 1985, the design dates back to 1955, and it had been used extensively in the intervening years. If they ever discuss the flag’s origins, EU bureaucrats sternly dismiss the myth that the symbol is in any way religious, or that it has something to do with the Virgin Mary. What pious nonsense! The problem is that this interpretation is exactly correct, and can easily be demonstrated to be so. The story also takes us back to a time when the European ideal was quite definitely a Catholic dream.

In the early 1950s, Europeans were in despair about the prospects for ever restoring peace and prosperity to their continent, and reasonable observers warned of a new dark age. Communist dictatorship prevailed across the Iron Curtain, and Western Europe’s independence often seemed tenuous. The best and most successful political alternative was the work of Christian Democratic politicians who envisioned a united Europe, democratic and anti-Communist, and founded on Catholic social principles. The new union would rise above the nationalistic claims inherent in the familiar dream of church-state alliances.

All these activists owed their worldviews to their First World War experiences. Germany’s Konrad Adenauer served as mayor of Cologne in the hungry years of 1917–18, successfully navigating the city through the time of despair and chaos. His great allies in the cause of European unification were Robert Schuman and Alcide de Gasperi, who both found their national identities changed by post-1918 border shifts, which suddenly made Schuman French and De Gasperi Italian. This experience gave them a strong sense of just how temporary and malleable Europe’s current political boundaries could be.

Their political outlook was profoundly rooted in religious attitudes. All were faithfully Catholic, and Schuman is currently under consideration for beatification and potential sainthood. A devotee of French philosopher Jacques Maritain, he was deeply influenced by his vision of integrating Christian values into a democratic Europe. In their European vision, they were pursuing ideas that had been regularly proposed by successive popes from the time of Benedict XV onwards. (It was Benedict who had so earnestly denounced the divisions of the Great War). Since the 1930s, popes had spoken in terms of a United States of Europe.

The European movement that actually emerged in the 1950s—the ancestor of today’s European Union—inevitably had a strong Catholic and Christian ideology at its core. More specifically, its Catholic leaders were inspired by the devotional upsurge that followed the 1950 proclamation of Mary’s Assumption to Heaven. Coincidentally or not, the crucial diplomatic agreement that serves as the charter for the modern European Union is the 1957 Treaty of Rome.

And that story provides the background to the EU flag. When the Council of Europe designed a new flag, it chose an assemblage that in the context of the time frankly evoked the image of the Virgin Mary, according to the interpretation of the 12th chapter of Revelation: “A great sign appeared in heaven, a woman clothed with the sun, and the moon under her feet, and on her head a crown of twelve stars.” Throughout Western art, moreover, the Virgin was usually portrayed in blue garb. The EU flag looks as if it represents a traditional image of the Virgin, with the central figure herself omitted, in a natural bow to Europe’s Protestants, Jews and Muslims.

So is this a Catholic myth? The best person to ask would be the flag’s designer, Arsène Heitz, who has explicitly credited the passage in the book of Revelation as his source for the image. In 1956, moreover, the Council donated a stained glass window to Strasbourg Cathedral, in the city it had chosen as its base. The window depicts the Virgin surrounded by twelve stars, in a strong blue field.

The date that the Council formally adopted what became the flag is also intriguing. It was December 8, 1955, the feast of Mary’s Immaculate Conception.

For a Catholic generation whose consciousness was formed in the horrors of the First World War, the time of the Fátima vision, how could they envision a united Europe except in Marian and apocalyptic terms?

So the EU flag is indeed a Marian emblem with the central figure removed or suppressed. In retrospect, we note how sadly appropriate that removal is for a political venture that seems determined to eliminate all traces of faith.

Philip Jenkins is a Distinguished Professor of History at Baylor University and author of The Great and Holy War: How World War I Became a Religious Crusade. This article was originally published in Aleteia on Aug. 27, 2014.