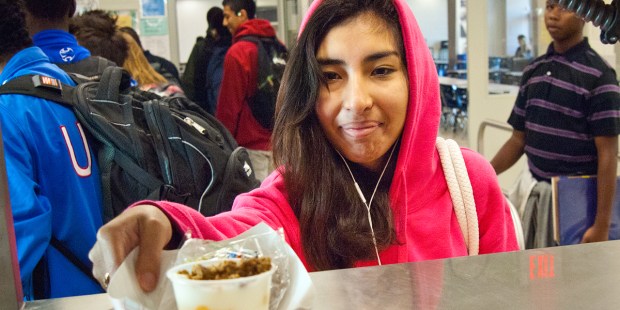 As an immigrant, he knew what it was like to feel isolated.

When Denis Estimon first came to the United States from Haiti, he had a hard time making friends in the first grade. The senior at Boca Raton Community High School told ABC News:

“There was a language barrier … and my mom was always working and my father was still in Haiti at the time so I wasn’t able to talk to anybody,” Estimon recalled. “I felt isolated. I felt lonely. And so I still remember how I felt not being able to speak to fellow students.”

This year, as a popular high school senior, that feeling of loneliness is a distant memory, but he when noticed other kids sitting alone at lunch, he decided to do something about it.

“It’s not a good feeling, like you’re by yourself. And that’s something that I don’t want anybody to go through,” Estimon told CBS News. “To me it’s like, if we don’t try to go make that change, who’s going to do it?” he said.

Together, he and three friends founded a club called We Dine Together. At lunch they go into the school’s courtyard and introduce themselves to students who are sitting alone. According to a report on CBS News, since it started last fall, hundreds of friendships have formed.

Estimon’s teacher, Jordan Hernandez told the Sun-Sentinel that he’s noticed a big change in how students relate to one other.

“I see coming together in one room Latinos, black, white, some students that are Irish, Haitian students — all over the map. They have one common goal and it’s to make friends and understand each other,” he said. “They bridge this chasm between students. It’s not just about eating pizza together but how we do life with one another.”

Watch this report from CBS news and read more about We Dine Together here.